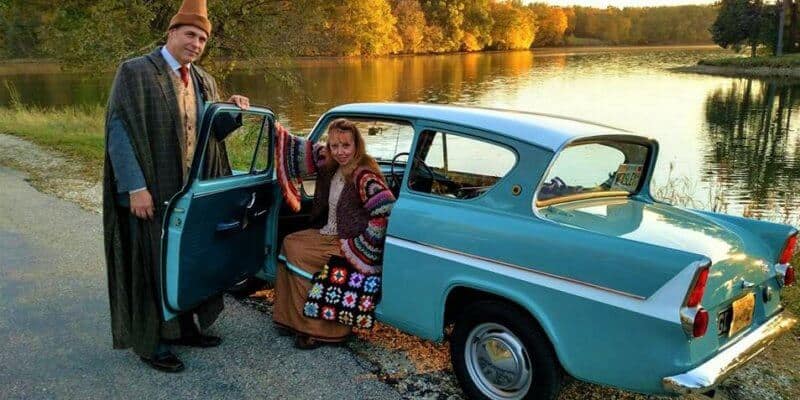 How does a Wizarding World fan enhance the enchantment? With a spot-on, fully dressed, Potter powered Ford Anglia, of course!

Wizard World fans Darwin Gillespie and Jennifer Becker might be more easily recognized as their cosplay personas, Arthur and Molly Weasley. However, the pair plussed their Potter-themed portrayal with the ultimate prop – an authentic 1966 Ford Anglia – fully dressed out to match its magical movie incarnation. 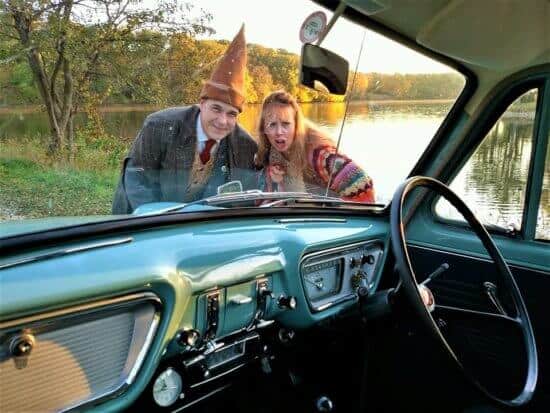 They’ve been cosplaying as Arthur and Molly Weasley since January 2017. Their adventure since that first foray into J.K. Rowling’s Wizarding World has been nothing short of magical. 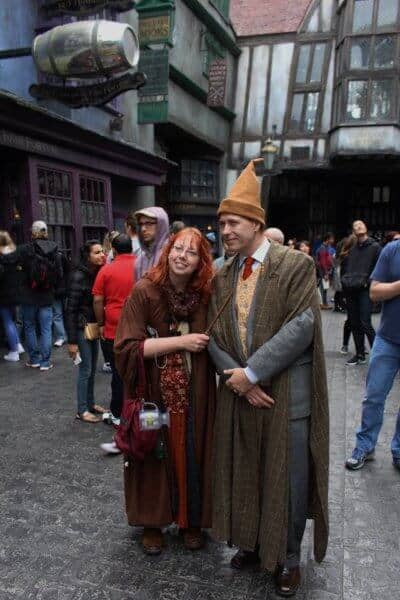 “We only meant to do it for the one time for going to the Celebration of Harry Potter event that was going on as it was the first time we had gone to that and little did she know that I took her down there also to propose to her in Diagon Alley on January 28th that year. We had such an overwhelming response from people running up to us asking to have their pictures taken with us that we decided to keep cosplaying as Arthur and Molly for Harry Potter events.” Darwin Gillespie (DG) 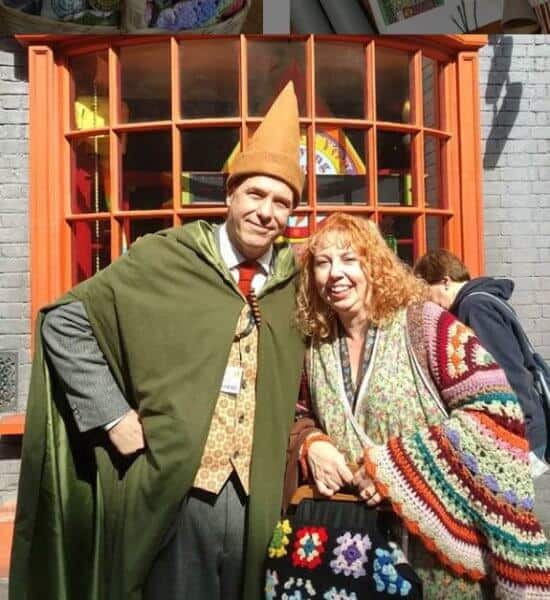 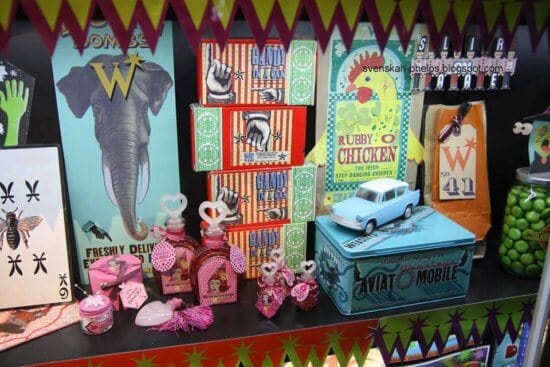 While Weasleys Whimsical World of Harry Potter offered an outstanding outlet for magical ministries, Darwin was ready for the ultimate leap of fandom fun.

“It was around this time that I started thinking that how could we make our cosplaying as Arthur and Molly even better. What could we do differently that perhaps no one else in the US wasn’t doing? Then I thought that since I have been wanting to buy a classic car why not look for a Ford Anglia to take with us to Harry Potter events. Problem was that those are next to impossible to find here in the US. So, if I was serious about it, I would have to look over in England where they were made and hope to find someone that would be selling one. I started by joining a group on Facebook for Ford Anglia 105E owners and posted that I was looking to buy one that was very much like the one in the Harry Potter movies.” -DG 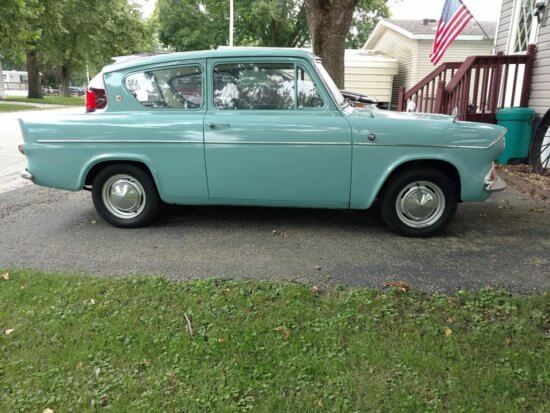 A fellow Potter fan in England pointed Darwin to the right place . . .

“He pointed me in the direction of someone that was selling one and after communicating with the seller for about a month I ended up buying it from him and it was shipped from the Isle of Wight on the day of Harry Potter’s and JK Rowling’s birthdays, July 31st of 2018. It took almost a month before it got to me but it started right off and everything was as great as promised by the seller.” -DG 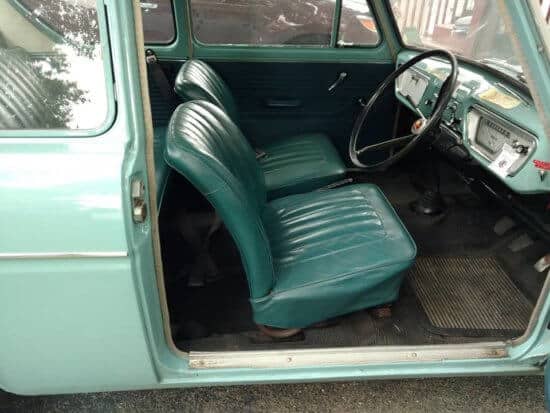 “I had to have white added to the roof and to the sides to make it like the ones in the movies so instead of having it painted I had the white wrapped on to the vehicle which can be easily removed as any point if necessary.” -DG 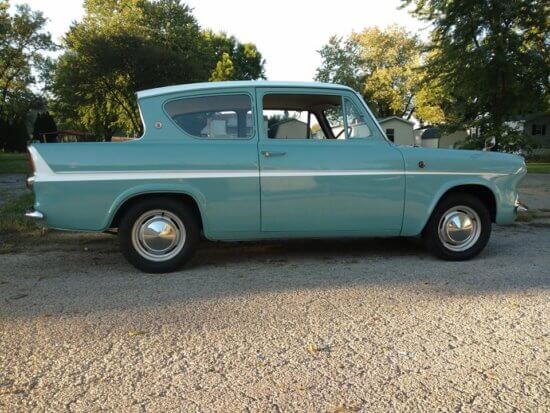 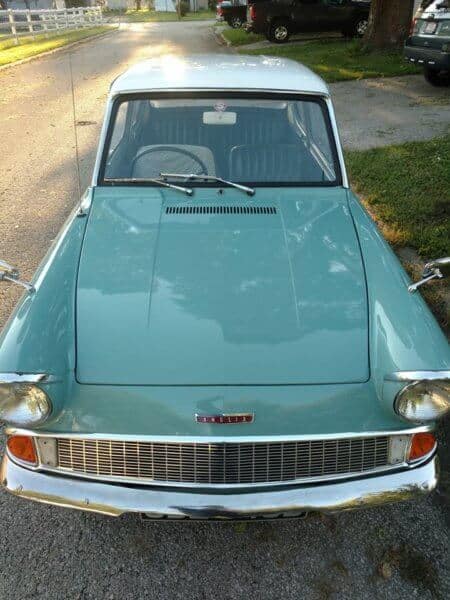 “Now when I got to thinking about us taking the car to places, I got to thinking that as great as it is to see the car what else can we do to make it more interesting for those that come to see it. Anywhere else that you go to see the Harry Potter car that is all you see and if you are lucky you might get to sit inside of it but that is it. Keep in mind that Arthur Weasley owned the car and the family rode in it. With a family of 7 kids and a wife that car should look like the Weasleys own it which means it needs to look more lived in like any other Muggle-owned family car.” -DG 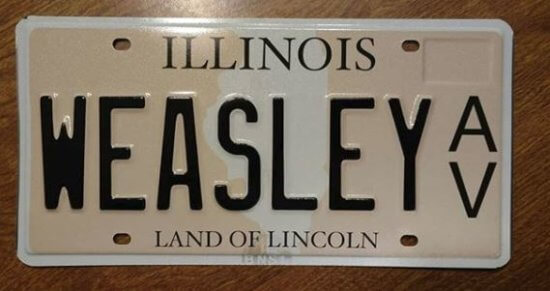 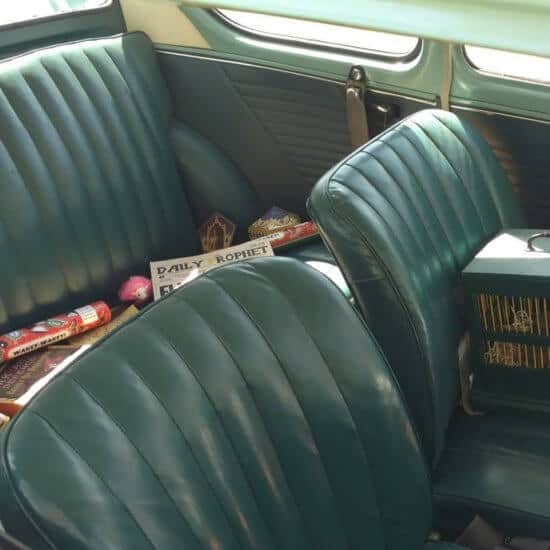 Within the trunk, Potter fans should recognize a Hogwarts bound trunk (modified by Darwin) along with several other fun finds. 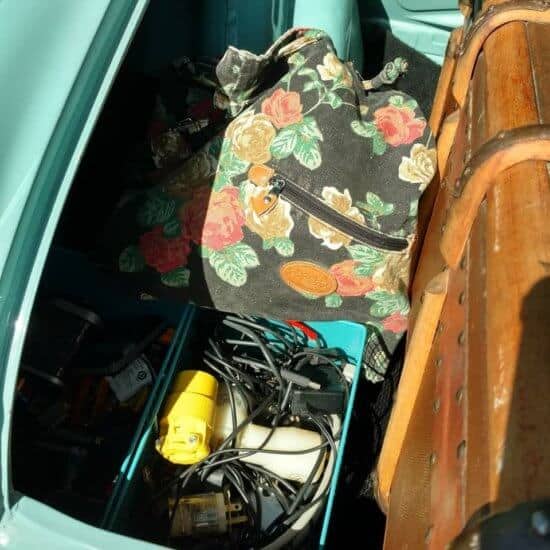 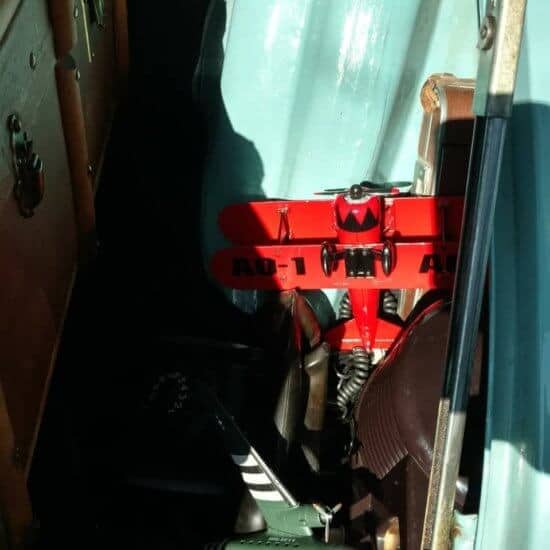 “So I decided that in the trunk or boot as it is called in England that I would have stuff in the back that Arthur would store back there such as various plugs and batteries that he liked to collect and then I decided to put some older Muggle devices that he would have been intrigued with such as a very old phone, old radio and a couple of old different type of cameras. Since he also had a deep interest for wanting to know how airplanes flew, I added a couple of older airplane models in to as well.” -DG

Molly gives you a personal tour of our family Anglia!

As a family vehicle, this particular antique transported many members of a large family over the years. As such it accumulated a rather sizeable collection of Wizarding World items: 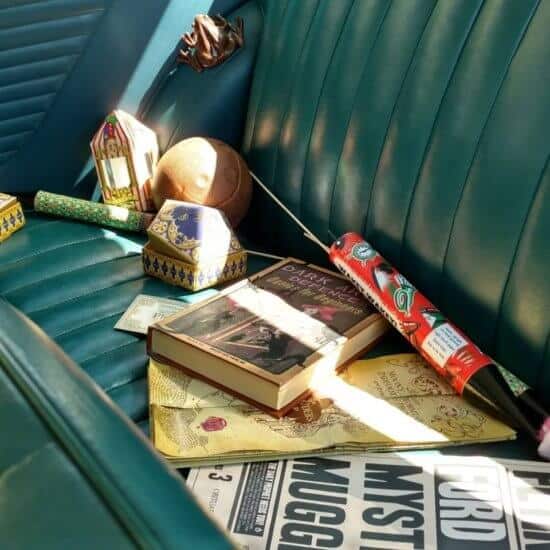 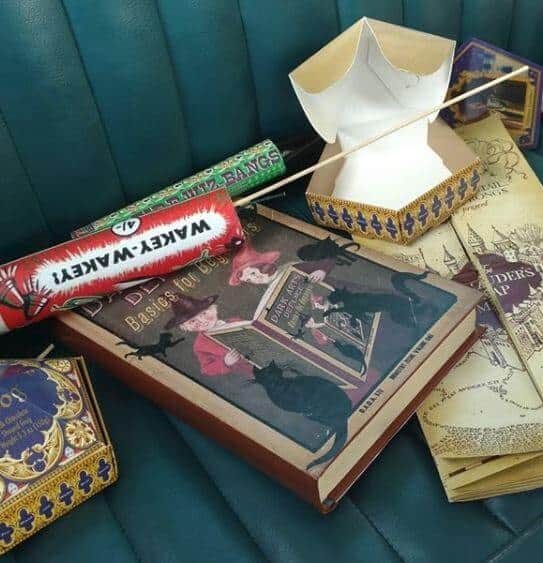 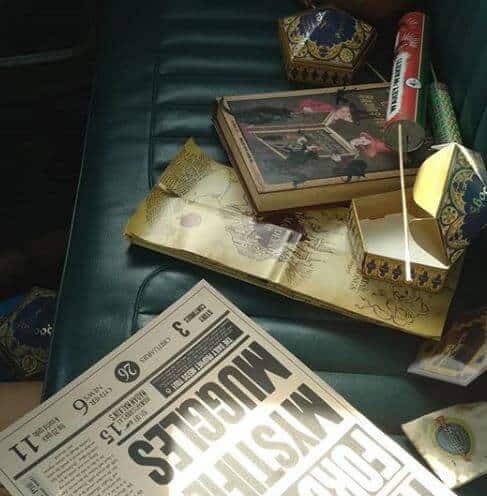 Other magical manifestations include a special, spellbinding Scabbers (complete with crafted cage) and a full-sized figure of Dobby. 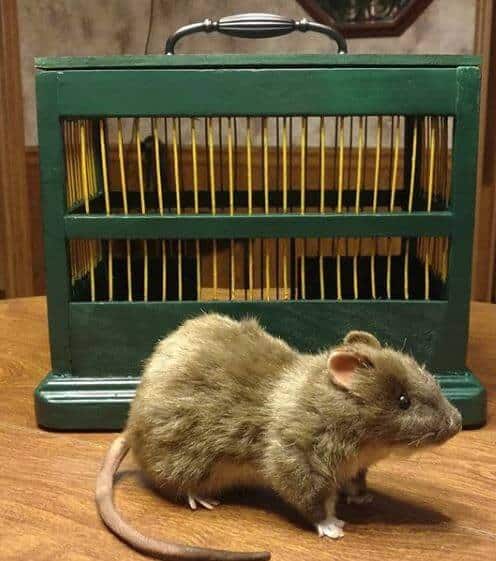 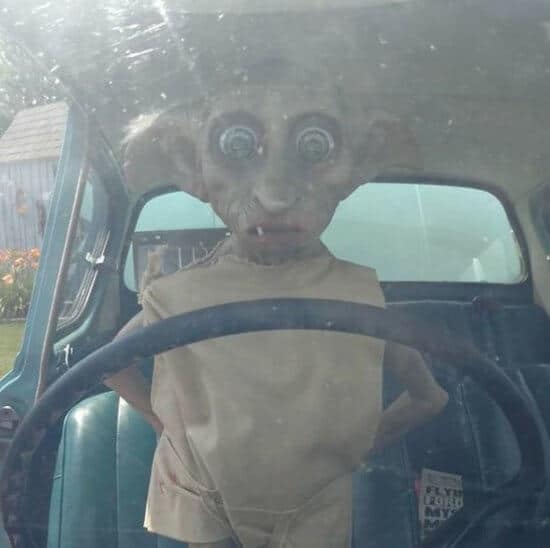 A copy of the “Daily Prophet” details Ron and Harry’s fanciful flight to Hogwarts.

“I was going to originally just put in the copy of the Daily Prophet but came up with the idea of trying to make it like the one in the movies where it has the moving images of the Anglia flying.  All this required was a little time, using some thick foam board on the back of it to create a housing for the cell phone to use for the video.  I downloaded an app to the phone that prevents the screen from ever shutting off or going in to screen saver mode and then downloaded a video clip that constantly looped of the movie.  I had to tweak it a little by making it black and white and slowing up the actual video a little but it worked beautifully and by hooking it up to a cell phone power bank so that it can keep going on for hours without dying.  This piece is everyone’s favorite as it adds the magic to the car and is my favorite as well. “ -DG

Finished creating a Daily Prophet with moving image that will be displayed in the back seat of our Anglia! 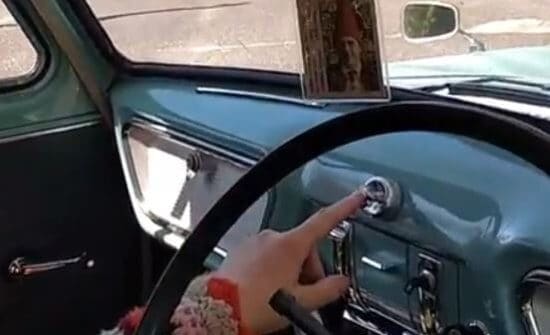 “So if you are wondering why we do this it is because we love bringing happiness to others that loves the Harry Potter universe and we want to make it as real and magical for them as it is for us.” -DG

When not maintaining muggle appearances as an RN and inventory specialist, Darwin and Jennifer delight and amaze as Arthur and Molly Weasley. Residing in Illinois, the couple also enjoy Civil War reenacting.  Follow their adventures on Instagram and Facebook. 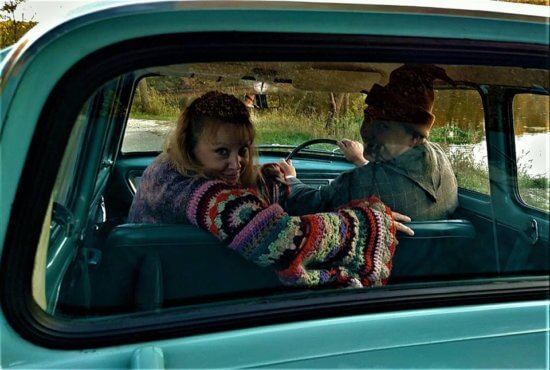 Do you have an enchanting example of themed home, office or vehicle at home Imagineering? We’d love to share your story with the rest of the Inside the Magic family. Please drop us a line (michael@insidethemagic.net) to tell your tale.