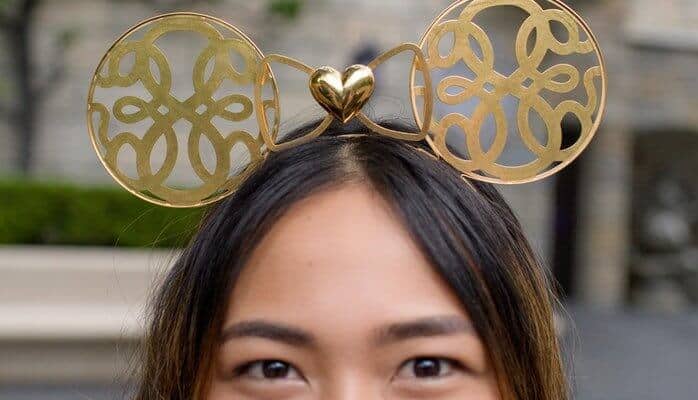 We can’t get enough new Minnie Mouse ears, and the celebrity-designed ears are some of our favorites. Lucky for us, Disney just announced an all-new pair of Alex & Ani golden Minnie ears are on sale this week, and we can’t wait to get our hands on them!

This new pair of Minnie ears is fit for royalty and definitely feel as high-end as the other designer ears we’ve seen advertised lately. The new accessory features the classic Minnie Mouse ear silhouette with a smaller, more subtle bow in the middle. The innovative headband design even includes a comb underneath the center of the bow, which allows the headband to stay in place while you are wearing it, making the ears as comfortable as they are fashionable. When it comes to looks, these ears have to be our favorite yet. The golden-hued metal is crafted into a damask-like pattern, and the center bow features a shiny golden heart. We’ve been dreaming of this new headband ever since we first laid eyes on it, and we think the gold color and subtle yet beautiful design will make these ears our new go-to accessory in the Disney Parks.

As Alex & Ani fans know, these ears wouldn’t be complete without subtle touches of Disney magic. Much like the Disney bracelets that Alex & Ani creates, this headband features two hidden messages engraved on either side. One side of the headband says “Follow your path” while the other says “Listen with your heart,” both of which are quotes from one of our favorite classic animated films, “Pocahontas.” If that doesn’t convince you to pick up these magical ears, we don’t know what will!

The new Alex & Ani golden Minnie ear headband will be available beginning this Friday, July 5, online on shopDisney and at select merchandise locations throughout Disneyland and Walt Disney World. The headband costs $178, so be prepared to spend more than you normally would on a pair of Minnie ears. But if you’re the ultimate Disney fashionista, a Minnie ear collector, or an Alex & Ani fan, you won’t want to pass these up.

What do you think of the new Alex & Ani ears? Let us know in the comments!