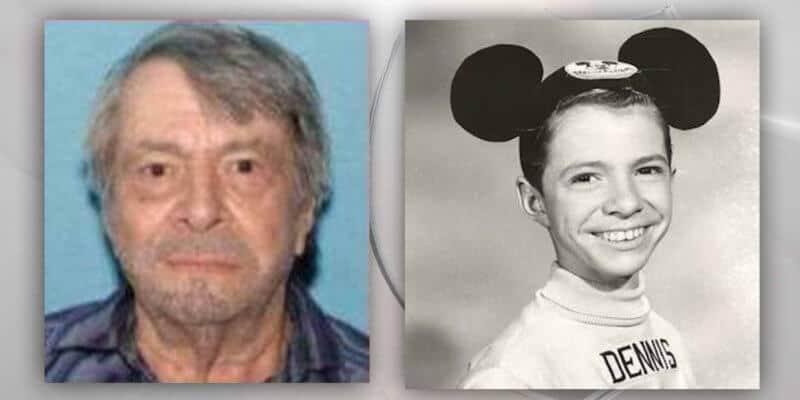 The body found in April at the Oregon home of original Disney Mouseketeer Dennis Day, who disappeared 11 months ago, has been identified as the missing man, according to state police.

According to Oregon State Police, the remains found at Day’s Phoenix, Oregon home were identified by the Oregon State Medical Examiner’s office. Reportedly, they were unable to use dental records or DNA to identify the body because of the condition of the remains.

At this time, there is no known cause of death, whether it was the result of foul play or accident. Currently, the state police investigation remains ongoing.

Janel Showers, Day’s Niece, confirmed the death on the “Help Us Find Dennis Day!” Facebook page that the family set up. In a post on the page she wrote:

“Our family would like to take this time to share with you that the remains found in Dennis and (husband) Ernie’s home have been officially identified as our beloved Brother and Uncle, Dennis Day. The cause of death is under investigation by the Oregon State Police so we will not be making any comments or answering any questions at this time.”

“Our family is truly thankful to the Oregon State Police for helping to bring closure to our family so that we can finally lay Dennis to rest. We love you Brother & Uncle Dennis!”

The body was originally found April 5, but at the time it was located, police did not say where or how long it had been there or how it might have been missed during previous searches for Day.

Day was first reported missing July 15, 2018, by his husband, who suffers from memory loss and was in the hospital at the time of Day’s disappearance. According to a missing persons report, Day “uncharacteristically” left his dog with a friend on the day he disappeared.

Reportedly, his car was found at the Oregon coast a week after his disappearance on July 26, 2018. In a report by AOL news, it was found that the car was located in the possession of a man and woman who claimed that Day had let them borrow it. According to police, there was no evidence of a crime.

Day, 76, served as a Mouseketeer with Disney’s Mickey Mouse Club for two years in the mid-1950s. He left behind his beloved cat and dog and his partner of more than 45 years, Ernest Caswell.