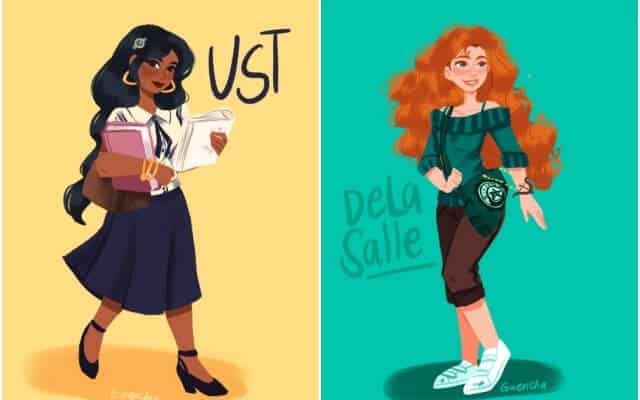 Were you ever curious what it would look like if our favorite Disney Princesses ever chose to leave their world’s behind and pursue higher education at a university? Well, this artist from the Philippines designed a pretty perfect picture for us!

The new series of images from Pinay artist Charles Gwynneth Icasiano feature the Disney Princesses of Jasmine, Merida, Ariel, Rapunzel, Pocahontas, Mulan, Aurora, Snow White, and a few others and they all portray the princesses in their collegiate best while studying in the Philippines.

Icasiano, known as Gwencha on social media, shared her inspiration for the imaginative series with InqPOP!, saying: “I’ve been an avid fan of Disney ever since I can remember! I originally wanted to see how Disney Princesses would look like if they ever get to study in our universities. That being said, I made sure that I found the perfect schools for each princess,” she explains.

Gwencha was able to create the images using just her iPad with an application called Procreate. The artist designed the Disney royals as average college students and wrote a short description on each photo as to why they would study in each particular university.

Take a look at the rest of the images below:

Icasiano hopes that the images will instill a sense of school pride to those who have graduated from alma mater and to those who are currently studying in any of these schools.

To see even more of Icasiano’s work, be sure to check out her official Facebook and Instagram pages.

What are your thoughts on the Disney Princesses reimagined as College students in this series of images? Let us know in the comments below!