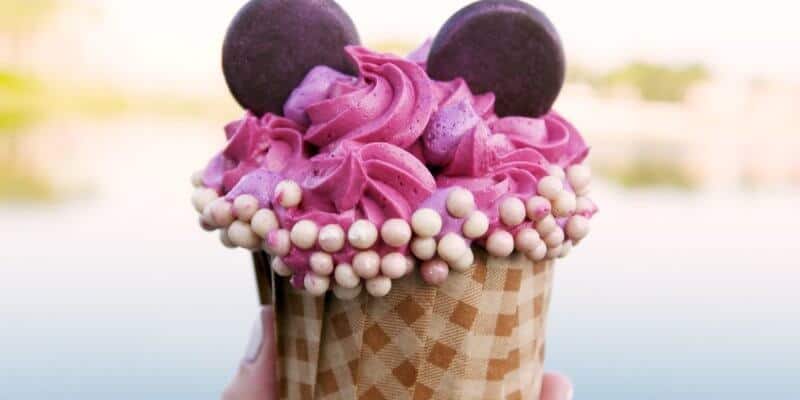 Having your food taste good is great, but having it look great in a photo is even better! At least, that’s the trend we’re seeing all over the place at Disney Parks. Walt Disney World just revealed an all-new Imagination Pink cupcake, and it’s possibly the most photo-worthy dessert we’ll see all summer.

This cupcake is beautifully themed after one of the trendiest new colors Walt Disney World is showcasing these days: Imagination Pink! Inspired by the silly and rambunctious Epcot mascot Figment, Imagination Pink is a vibrant color perfect for the summer season. We’ve been seeing Imagination Pink merchandise pop up at merchandise locations everywhere at the Disney Parks. But just like with other trendy colors, Disney likes to create food that matches! That’s why you can now purchase this bright and happy cupcake to match the color of your new accessories.

Here’s a closer look at the inside of the Imagination Pink cupcake:

The Imagination Pink cupcake is a classic vanilla cupcake with bright pink sprinkles distributed throughout the batter to give it a gorgeous pink speckled color throughout. Disney pastry chefs core out the center of each cupcake so they can fill it with a raspberry cream cheese buttercream frosting. After giving each cupcake a fun rosette swirl design with buttercream frosting on top (and adding a bit more of that cream cheese buttercream here and there), it is garnished with edible white chocolate pearls, edible fuchsia glitter, and two chocolate Minnie ears. What cupcake could be more magical than this one?

The Imagination Pink cupcake is available at select bakery counters throughout Walt Disney World from June 30 through August 3, so be sure to be on the lookout for this amazing photo-worthy treat on your summertime Disney vacation.

What is your favorite dessert at Walt Disney World? Let us know in the comments!