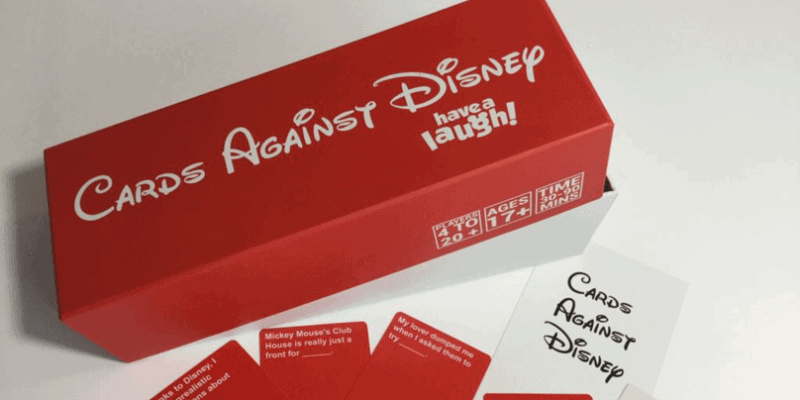 Disney films have played a huge part in many of our early childhoods as they feature some of our favorite animated characters and stories of all time! So naturally, when a mother bought her family a Disney-themed card game, she assumed it would be a nice and innocent way to pass the time. However, in this case, she was gravely mistaken.

Debbie Fanning purchased the Disney-themed Cards Against Humanity game Cards Against Disney in the goodwill of knowing that Disney was featured in the title of the game. Although, Debbie wasn’t familiar with Cards Against Humanity, which is designed to assemble the most disgusting phrases possible to get the rest of the players to chuckle and even wince.

Debbie was under the impression that the game would feature fun and innocent jokes about Princess Anna and Olaf. But in reality, Debbie’s family was faced with crude innuendos about Tinkerbell’s chest, a drugged-up Dumbo, and highly inappropriate allegations against Wreck-it-Ralph that shouldn’t be heard by children.

According to LADbible, some of the cards that left Debbie speechless included references to Li Shang, Pinocchio, and Kronk, which we’d prefer not to share. Although, it can be assumed that they’re not meant for the eyes and ears of kids.

My mam bought cards against Disney thinking it would be a nice innocent game and it’s really not quite what she expected ??? pic.twitter.com/9Vi8ihC0s4

Amy, Debbie’s daughter, shared the story on Twitter, writing “My mam bought Cards Against Disney thinking it would be a nice innocent game and it’s really not quite what she expected.” The tweet now has over twenty-thousand hearts and almost three-thousand retweets on Twitter.

Amy says that when the family first started playing the game together it was quite awkward. But since the first few games, the family has really taken to the crude card game and hasn’t stopped playing it since.

Amy added: “We’ve played it quite a few times now it has become a family favorite of ours! However, I would definitely recommend playing it once you’ve had a drink.”

Word to the wise, if you’re looking for a fun Disney-themed game to play with your 17 and older-aged friends, this might be for you. However, this game is most certainly not for children.

According to the firm responsible for the game, the copy bought by Debbie was a fake. The actual game is only available as a download online.

What are your thoughts on this mother innocently purchasing this crude-humored game for her family? Let us know in the comments below!