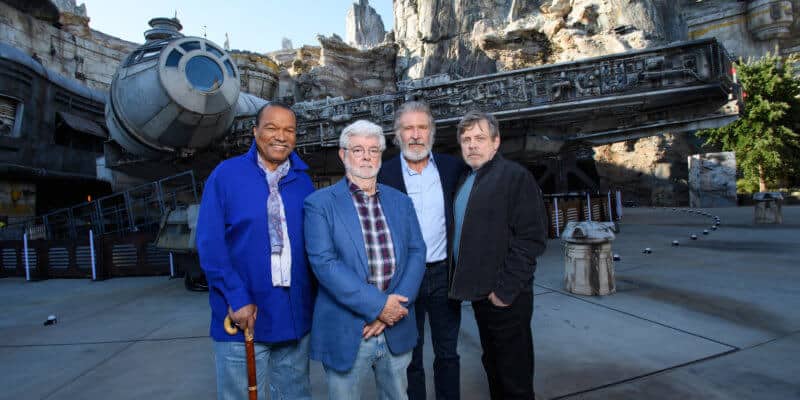 Last night, Bob Iger, Disney Chairman and CEO of The Walt Disney Company, stood on a stage set up in front of the life-sized Millennium Falcon, outside of Millennium Falcon: Smugglers Run, to dedicate the new land. And in a nod to the space traveling warriors who started it all, Iger welcomed to the stage the actors who played the original Luke, Han, Lando, and the man who brought them all to life in the first place!

Lucas was first to be called on stage, who spoke about the famous “bucket of bolts” behind them. During his quick speech, Lucas referred to the new attraction (Millennium Falcon: Smugglers Run) as Galaxy’s Edge “Star Tours on steroids.”

Williams was next, talking about Lando Calrissian’s long history in the “Star Wars” franchise and the fact that his character was the original owner of the Falcon.

This was followed by Mark Hamill (Luke Skywalker), who gave an emotional speech about his connection to “Star Wars” and how it’s affected not only himself but the fans.

Finally, Iger called for the Millennium Falcon to fire its engines, but the machine wouldn’t start. He then asked if anyone in the crowd knew how to fix it. This was when Ford finally appeared!

“Can anyone fix this thing?”

Harrison Ford comes out to hit the Millennium Falcon and open #GalaxysEdge.

Ford came out to a massive applause and nonchalantly walked over to the ship and gave it a few whacks. He then called out to the late Chewbacca originator Peter Mayhew and said, “Peter, this one’s for you.”

The Millennium Falcon finally powered up and fireworks shot into the sky, marking the official opening of the land!

Star Wars: Galaxy’s Edge opens on Friday, May 31, in Disneyland and on August 29 at Disney’s Hollywood Studios.

What are your thoughts on all the original stars of “Star Wars” showing up for the opening of Galaxy’s Edge? Let us know in the comments below!