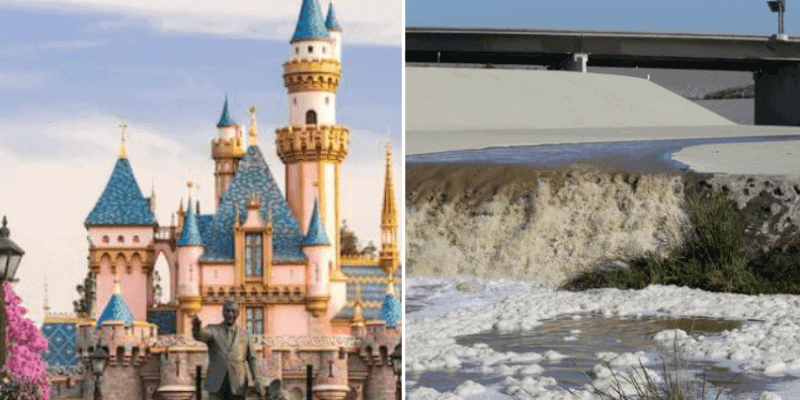 The Happiest Place On Earth may not be too safe from summer storms. Federal engineers are saying that a local dam could face significant damage if another huge storm hits southern California, leaving Disneyland Resort and several other communities in danger of flooding.

LA Times reports that earlier this month, the 78-year-old Prado Dam was assessed by government officials and engineers. And after taking a look at the aging structure, the U.S. Army Corps of Engineers raised the dam’s risk category from “moderate” to “high urgency.” This means that the next “significant flood event” could potentially breach the Prado Dam’s spillway, thereby possibly flooding local Riverside and Orange County communities from Disneyland Resort in Anaheim all the way to Newport Beach.

The Prado Dam is located adjacent to the 91 Freeway nearby Riverside and Orange counties. For most of the year, the dam holds little to no water. But during significantly rainy seasons or in times of damaging storms, the structure is intended to collect water and prevent flooding along the Santa Ana River, which runs throughout southern California. If nearly-100-year-old structure breaks or is badly damaged in the next big rain storm, the consequences could be dire.

“Our concern right now is about the concrete slab of the spillway and how well it will perform if water were to spill over the top of the dam,” said Lillian Doherty, the Army Corps’ division chief. “We will determine whether or not it is as reliable as it should be.”

So what does this mean for Disneyland and the surrounding communities? The U.S. Army Corps of Engineers is currently working on interim and permanent risk-reduction measures at the Prado Dam, as well as public outreach strategies to alert the approximate 1.4 million people who live and work in 29 communities downstream of the Santa Ana River, the area that would potentially be affected by the flooding. Currently, the Prado Dam is fully functional, although it’s still considered high risk for damages.

“Corps staff is routinely on-site at Prado Dam to operate and monitor the dam during rain events,” said spokeswoman Dena O’Dell. “The Corps’ assessment of the dam doesn’t mean that failure is taking place; it means the agency has identified performance concerns that require attention to meet the corps’ rigorous dam safety standards.”

While there is a risk for flooding, only time will tell the consequences. But just as Disneyland Resort is committed to keeping its guests safe, the Army Corps is also committed to keeping the southern California communities safe from potential flooding. For now, we’ll keep you updated on the status of the dam and surrounding communities as this story develops.