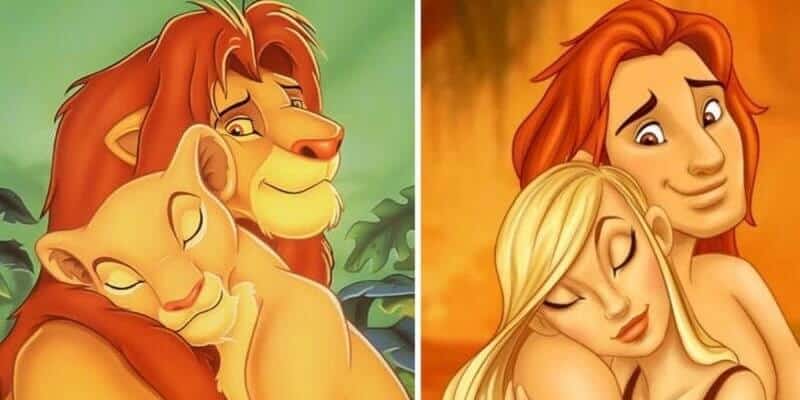 Some of our favorite childhood memories include seeing our favorite heroes animated on screen from some of Disney’s most classic cartoon films and TV shows. Generally, when seeing these icons, they’re usually in the form of whatever animal Disney animated them to be in. However, we all know that deep inside these characters beats the heart of a human soul, which children and fans alike all connect with. Here is a collection of animated renditions of what these beloved characters would look like if these classic characters were animated as humans in their own style of animation.

Together, Simba and Nala form one of the most beloved animated love stories of all time and seeing them in human form only re-captures all these same feelings!

Timon and Pumbaa are all about a problem-free philosophy and when paired with their pal Simba, the three can’t help but exude Hakuna Matata vibes! Seeing the trio in human form, it’s obvious their friendship is undeniable, no matter what species it takes form in.

A pair who’s most memorable for sharing a piece of spaghetti is even more adorable as man and woman. I wonder if their human children would be just as cute as the original couple’s puppies?

There’s no better crime-fighting duo in all of Zootopia than Judy Hopps and Nick Wilde! Similar to their animal form, the human version of Judy still seems to be the life of the party over Nick.

Goofy is one of the most memorable and beloved Disney characters of all time and this re-imagination perfectly captures the hilarious dog in the version of a man! I wonder if his human form is just as clumsy?

The two most famous Disney characters of all time, who share one of the most famous love stories of all time, are perfectly captured in this anime-inspired re-imagination. The anime-themed artworks’ use of a polka-dot outfit for Minnie and big and red buttoned shorts for Mickey are spot on!

What do you think of these famous re-imagined Disney characters as humans? Let us know in the comments below!

Comments Off on Artists imagined famous Disney characters as humans and the results are mind-blowing!