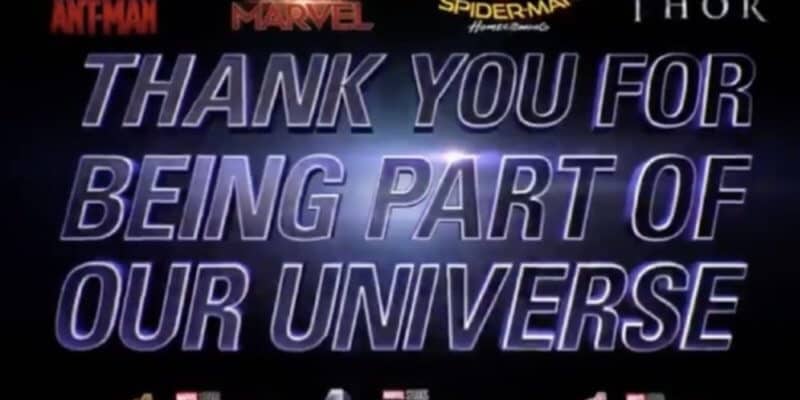 The weekend Marvel fans everywhere have been waiting for is officially over and with it came the end to an incredible superhero saga and a success like no other for Marvel Studios. In thanks to the film company’s fans, Marvel Studios tweeted their gratitude with a special and heartfelt nod from the film.

WARNING: THE EXPLANATION OF THE TWEET INCLUDED IN THIS ARTICLE COULD SPOIL DETAILS FROM “Avengers: Endgame.”

As we all know, “Avengers: Endgame” shattered the galaxy at the box office this past weekend, raking in over $1.2 billion worldwide and with a success that huge, it would be mad to say that it wasn’t in part thanks to the film series’ dedicated fans. On Saturday, Marvel Studios Tweeted a special message to all the devout Marvel Studios fans everywhere expressing their thanks with a special nod to the film, which may leave you a little misty eyed.

The Tweet, featured below, says, “Thank you to all the fans around the world for being part of our universe. We love you 3000.” If you’ve seen Endgame, you probably know that this line is from Iron Man (Robert Downey Jr.) and his young daughter, Morgan Stark.

Thank you to all the fans around the world for being part of our universe. We love you 3000. #AvengersEndgame pic.twitter.com/ZAHYQDetZ5

In the film, when Stark would tell Morgan he loved her, she would respond with she “loves him 3000,” which is also a line he repeats in the final video message that we see towards the conclusion of the movie.

As special and sweet as this message from Marvel is, it is also a bit heartbreaking as this film saw an incredible loss that was extremely devastating for many fans. Tony Stark was an integral role in the film franchise and this thanks from Marvel really pulls from that power the character had in the series and celebrates it.

What are your thoughts of “Avengers: Endgame”? Let us know in the comments below!

Comments Off on Marvel Studios tweets “We Love You 3000” to fans for massive “Avengers: Endgame” success