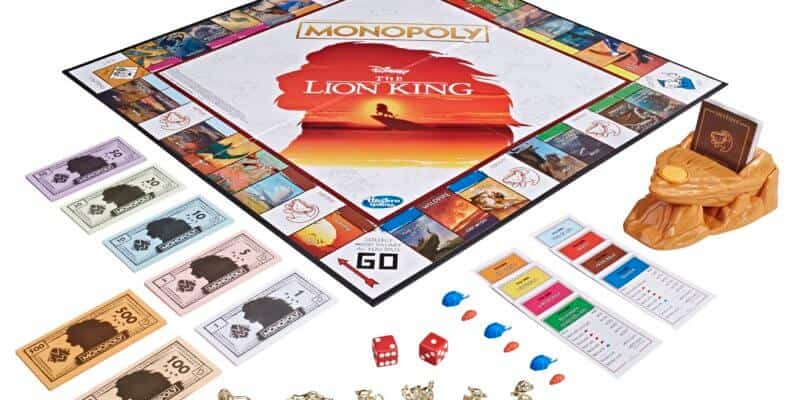 With Disney’s new version of “The Lion King” hitting theaters this summer and the 25th anniversary of the original animated film coming up, Hasbro is releasing a special Monopoly: The Lion King edition!

In this new edition of the game, players can celebrate Simba’s journey to becoming King of the Pride Lands with a game board featuring artwork from the original film. Players can choose from six character tokens: Mufasa, Simba, Nala, Timon, Pumbaa, or Scar.

The game’s iconic Title Deed cards have gotten a “Lion King” makeover for the new edition. There’s a mix of locations like Pride Rock and the Hyenas’ Lair as well as concepts such as “The Circle of Life” and “Remember Who You Are.”

Instead of Chance and Community Chest cards, Monopoly: The Lion King comes with 32 Destiny cards. According to INSIDER, each Destiny card recalls a scene from the movie and features Rafiki’s drawing of baby Simba. Rather than hotels and houses, this game includes plastic beetles and grubs to place on the game board.

Perhaps the coolest part of this new edition is the Pride Rock card holder, which holds the game’s Destiny cards. A touch of the button plays the classic “Nants Ingonyama” from the opening of the film.

If you’re feeling nostalgic for the animated movie, this new edition of Monopoly can transport you right back to 1994. Why not play a few rounds before heading to the theater to catch the new “Lion King” movie, which opens on July 19! If you missed the trailer for the upcoming movie, you can watch it here.

Monopoly: The Lion King edition will be available for $39.99 starting April 22 at Walmart. The game arrives at mass retailers in June and it’s recommended for ages 8 and up.