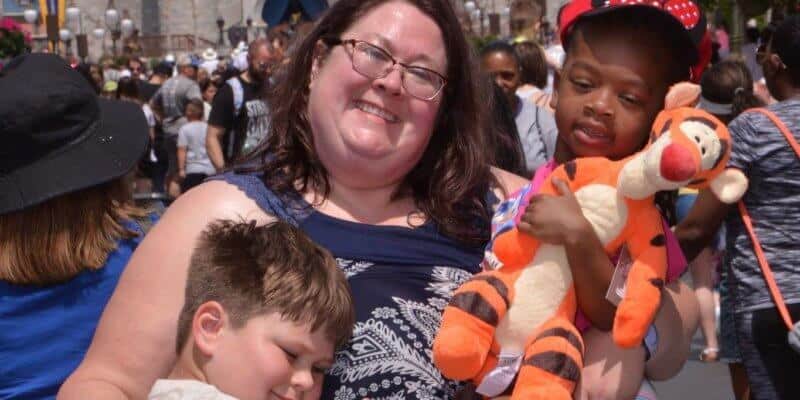 The tragic murder of a 4-month-old infant boy saved the life of a young girl, who the boy’s grieving mother finally met years later in an emotional encounter at Walt Disney World’s Magic Kingdom.

In 2014, Alicia Erchul, the mother of the 4 month-old infant boy Gabriel, left her son and his brother Aidan with her husband Donald Crystalus while she went to work one morning.

According to a Jacksonville Sheriff’s arrest report, Crystalus stated he had been having issues with Gabriel, saying the infant had thrown up his breakfast, wouldn’t stop crying and had been kicking his legs and throwing a fit. That same afternoon, Crystalus alerted his wife that something was wrong with the infant, who was later taken to the doctor’s office.

Unfortunately, at this point, it was too late. Gabriel had been suffering from brain swelling due to severe trauma, which ultimately caused the boy to die two days later.

In 2016, Alicia’s husband was charged with second-degree murder in the death of his son Gabriel and was later sentenced to 40 years in prison.

In the wake of her son’s death, Alicia decided to donate Gabriel’s liver and heart in the hopes of saving somebody else’s child.

Morgan Price, from Birmingham, Alabama, who had been born a week apart from Gabriel, had a failing heart and had been laying in a hospital bed hooked to an IV during the time of the tragic events of Gabriel’s death.

Because of Price’s health condition, which left her with an enlarged heart that didn’t pump enough blood, doctors ordered the girl to stay in the hospital until she could receive a heart transplant.

According to Orlando Sentinel, after the transplant, Morgan has since gone on to grow up to be a 4-year-old who loves playing with her dollhouses and getting her hands dirty with Play-Doh and slime. And overall, the little girl is healthy.

After the tragic events of Gabriel’s death, Alicia has gone on to try to create a new normal for her and her son Aidan. Every June 30th, Gabriel’s birthday, she and Aidan visit Walt Disney World to celebrate his life.

Orlando Sentinel reports Alicia is now divorced from her incarcerated husband and has gone back to school to earn a master’s degree in addition to working as an administrator at the University of North Florida in Jacksonville.

After Gabriel’s death, Aidan became quiet but has since been slowly coming out of his shell. Currently, the first-grader is earning badges for Cub Scouts and doing well in both math and science at school.

Once Alicia’s family found a sense of normality again, she decided to email Morgan’s grandmother. “I’m sorry it’s taken so many years to write you,” said the beginning of her email, which Alicia had been unsure about sending due to not knowing if they’d ever write her back. The message was sent through an organ donation agency to protect Morgan’s family’s identity.

“I didn’t want to shadow the joy you must have felt in receiving a necessary gift to save your child’s life by sharing about my son’s life,” Erchul wrote. “I have prayed every day for Morgan that her heart has grown stronger …”

However, Johnson did reach back out to Alicia and as it turned out, Morgan’s family had planned to go to Walt Disney World on their spring break trip in March and asked if Alicia and her son would like to join them.

According to Alicia, all of the nerves the family felt meeting for the first time faded fast. Morgan “warms up to strangers quickly” and because of this the Erchul family was able to fit in well with Morgan’s family. Aidan even got to play with Morgan’s relatives in a game of hide-and-seek in the rental home where they stayed.

“It was just incredible,” Johnson said, who did her best not to cry the first time she met Gabriel’s mom.

During the meeting, Morgan showed Alicia her scar from heart transplant surgery, which she calls her “zipper.”

“She just held me so tightly,” Erchul said. “She wanted to hold my hand all the time. … It’s brought a sense of peace that I didn’t realize I was missing.”

Over the next three days, the pair giggled together as they rode Frozen Ever After at Epcot and landed front-row seats at the Lion King show at Animal Kingdom, even meeting the cast.

According to Orlando Sentinel, Johnson has promised to stay in touch as the vacation came to an end. Morgan cried when Erchul left to go back home.

As a special gift to Alicia, the Johnsons gave her a stuffed pink unicorn with a recording of Morgan’s heart beating inside it, which Aidan has been sleeping with ever since.