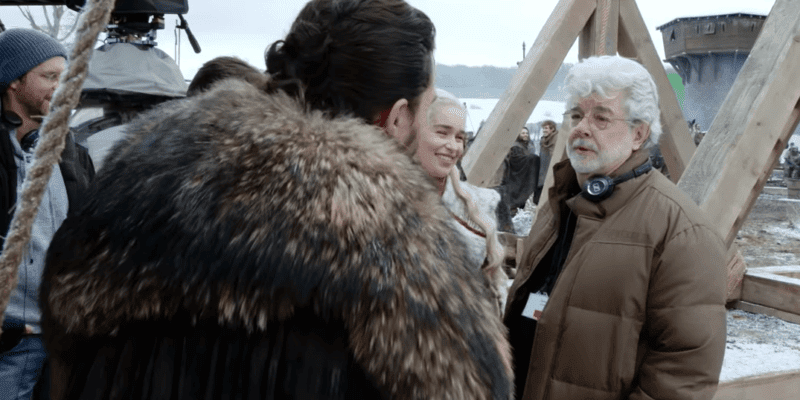 It’s no wonder the Season 8 premiere of “Game of Thrones” was such a hit. George Lucas had a hand in directing it. The “Star Wars” creator has visited Winterfell, and fans everywhere are freaking out that two of the biggest fandoms have collided once again.

This week, HBO revealed a behind-the-scenes look at the Season 8 “Game of Thrones” premiere, sharing that Lucas himself dropped by the show’s set just because he felt like it. In the video, we see Lucas mingling with the cast, meandering around Winterfell, and even standing side-by-side with episode director David Nutter behind the monitor. As “Star Wars” and “Game of Thrones” fans ourselves, we can’t imagine what it would have felt like to be on set with either of these men, let alone alongside both of them. “It was so cool for me,” Nutter says in the behind-the-scenes clip.

“The first time I could remember telling stories was me as a little kid mashing together these Stormtrooper dolls,” executive producer and writer David Benioff shares in the clip. “For so many of us, [George Lucas] is the one who started our obsession with this big, epic storytelling.”

We’ve seen the “Star Wars” and “Game of Thrones” worlds collide before. Emilia Clarke (who plays Daenerys Targaryen) starred in “Solo.” Gwendoline Christie (who plays Brienne of Tarth) starred as Captain Phasma in “The Force Awakens” and “The Last Jedi.” And sometime in the future, we’ll see a new series of “Star Wars” films directed by “Game of Thrones” showrunners David Benioff and D.B. Weiss. With fans loyal to both “Game of Thrones” and “Star Wars” (and with the similarly intense and beloved storylines that both franchises possess), it’s no surprise that we’re seeing some overlap. Having Lucas on set was simply the icing on the cake.

But Lucas did more than just observe on his visit to Winterfell. He briefly directed Clarke and Kit Harington (who plays Jon Snow) in the scene in which they arrive in Winterfell together for the first time. It seems that Lucas is more partial to Clarke, as well, since he told Harington that he doesn’t care too much about Jon Snow. “That was great,” says Lucas to Harington in the clip before continuing, “No direction for you. I don’t really care about you. I don’t care what happens to you.”

We’re not sure whether Lucas was serious when he said he doesn’t care about Snow, but seeing him on set directing the show’s stars only serves to make us more excited for what’s to come for the final series of the show.

Watch George Lucas on his visit to the “Game of Thrones” set in the video below:

What do you think of George Lucas’s visit to the “Game of Thrones” set? Let us know in the comments!