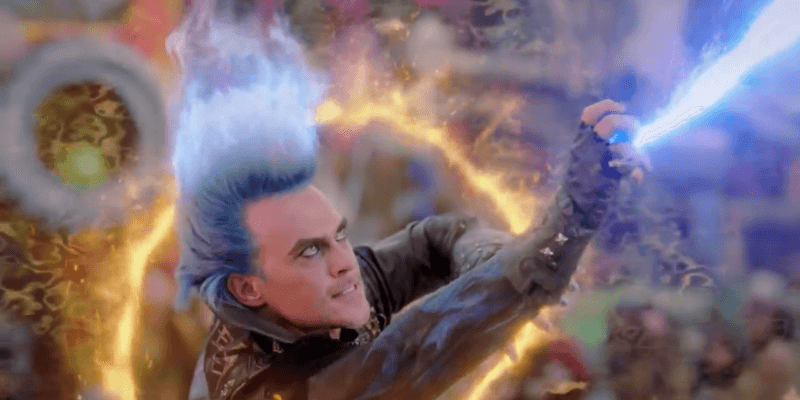 Disney Channel fans are eagerly awaiting “Descendants 3,” which premieres this summer, and this week we’ve gotten a new peek at the upcoming TV movie.

A new trailer debuted during “Good Morning America” on Friday, April 5, and by the looks of it, the citizens of Auradon are in a lot of trouble. A “great evil” is descending on the realm, causing people to fall under a sleeping spell. Hades (played by Cheyenne Jackson) wields a powerful “ember,” which just might be the key to stopping the chaos. Take a look at the new trailer below.

In addition to Hades, “Descendants 3” introduces other Disney Villains, too. In this new installment, we meet Dr. Facilier (Jamal Sims) from “The Princess and the Frog” and his daughter, Celia (Jadah Marie). Thanks to POPSUGAR, we have a closer look at these two new characters and their amazing costumes.

“She is a daddy’s girl,” Marie told POPSUGAR. “As you can see in her wardrobe, she’s literally copying her dad from the top of her hat to the bottom of her feet. She is Dr. Facilier’s daughter.”

Here’s the official synopsis of “Descendants 3”:

Mal, Evie, Carlos, and Jay return to the Isle of the Lost to recruit a new batch of villainous offspring to join them at Auradon Prep. When a barrier breach jeopardizes the safety of Auradon during their departure off the Isle, Mal resolves to permanently close the barrier, fearing that nemeses Uma and Hades will wreak vengeance on the kingdom. Despite her decision, an unfathomable dark force threatens the people of Auradon, and it’s up to Mal and the VKs to save everyone in their most epic battle yet.

“Descendants 3” will be the biggest in scope of all the previous movies,” director Kenny Ortega told Entertainment Weekly. “Everything has been scaled to deliver an epic story. The characters, the sets, the costumes, the dance numbers are all bigger, better and the baddest!”