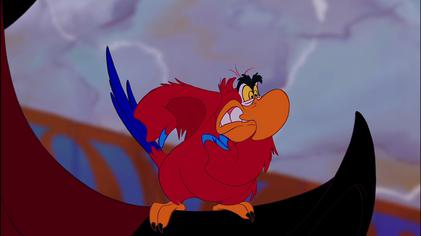 Alan Tudyk, who voiced multiple Disney characters over the years, is taking on the role previously voiced by Gilbert Gottfried in the 1992 animated film. Some of Tudyk’s previous Disney voice roles include KnowsMore in “Ralph Breaks the Internet,” King Candy in “Wreck-It Ralph,” the Duke in “Frozen,” and Hei Hei in “Moana,” to name a few.

Disney recently revealed the first full-length trailer for the upcoming live-action “Aladdin.” Though Iago has been spotted flying around in footage from the new movie, we have yet to hear him speak.

“Aladdin” stars Mena Massoud as Aladdin; Naomi Scott as Jasmine; Will Smith as Genie; Marwan Kenzari as Jafar; Navid Negahban as the Sultan; Nasim Pedrad as Dalia and Billy Magnussen as Prince Anders. The film is directed by Guy Ritchie and written by John August and Ritchie.

Along with the new trailer, Disney released this new poster for the film:

Disney’s live-action “Aladdin” arrives in theaters on May 24. Are you excited to hear Alan Tudyk’s take on the memorable role of Iago?