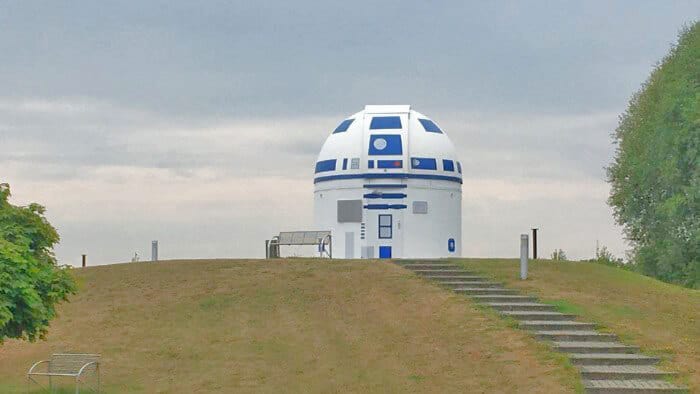 A German professor obsessed with everything “Star Wars” and “Star Trek” painted his observatory into a giant R2-D2 and it’s so out of this world, it defies gravity.

In a galaxy far, far away, lived Hubert Zitt, a professor at the Zweibrücken University of Applied Sciences, who’s most known for his lectures on “Star Trek” and “Star Wars.” He put together a small team and transformed the Zweibrücken Observatory of the Natural Science Association into a larger-than-life R2-D2 and it’s every Star Wars fan’s dream come true.

According to Boredpanda, the sci-fi professor completed the project in September 2018 with the help of his father-in-law Horst Helle, master painter Klaus Ruffing and several helping students. Since its completion, the droid-themed observatory has been catching the eye of Star Wars fans from throughout the galaxy!

Since its construction, fans have posed with the other-worldly structure. Below you can see one fan dressed a Jawa.

Another fan brought their very own R2-D2 to pose with the structure!

Before Dr. Hubert Zitt took on the persona of the “Star Trek” and “Star Wars” obsessed professor, he first began his journey in science in electrotechnology. Zitt studied the science at Saarland University, where he received his doctorate in the field of systems theory of electrotechnology. Now, the professor, who still has his head in the stars, is tenured in the field at the University of Applied Science, Kaiserslautern, Zweibrücken.

Even though the professor mainly teaches electrotechnology, in his spare time, he’s spreading information about his favorite happenings in sci-fi pop culture, which the Star Wars enthusiast has gained worldwide acclaim for.

His first lecture to gain traction from across the globe was a “Christmas lecture.” And in 2005, Zitt decided to take his lectures on the road to other universities and conventions such as FedCon, Europe’s biggest Science Fiction Convention.

According to Boredpanda, Zitt has gained so much recognition in his field that he was able to write the preface of the book “Star Trek in Germany” along with the son of the Star Trek inventor Gene Roddenberry in 2008. That same year, the professor became a regular lecturer at The University of the Incarnate Word in San Antonio, Texas, teaching the course “The Physics of Star Trek.”

What are your thoughts of this larger-than-life R2-D2-themed observatory? Let us know in the comments below!