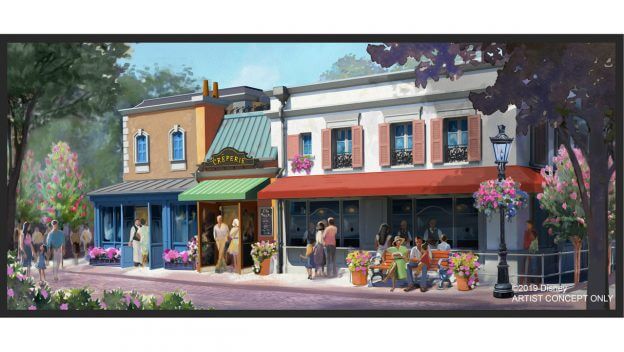 The France pavilion is already home to incredible cuisine at Chefs de France and Monsieur Paul, and soon, the pavilion will offer another staple of French food: the crêpe!

The new crêperie will offer table service and quick service in an all-new location near the upcoming Remy’s Ratatouille Adventure attraction. Featuring a menu inspired by the Brittany region of France, the new eatery will serve savory crêpes (galettes) and sweet crêpes. “The new crêperie will feature the cuisine of celebrity chef Jérôme Bocuse, the mastermind behind the pavilion’s Chefs de France brasserie and its celebration of gourmet cuisine, Monsieur Paul,” says Disney.

The crêperie will open in time for the 50th anniversary of Walt Disney World Resort, but its official opening season and name haven’t been revealed yet. Other 50th-anniversary updates to the France pavilion include a new “Beauty and the Beast” Sing-Along experience and the previously mentioned Remy’s Ratatouille Adventure attraction. Based on the hit Disney-Pixar film from 2007, the attraction virtually shrinks guests down to the size of Remy the rat and has them scurry to safety across the kitchen of Gusteau’s restaurant. In addition to these new attractions, the Impressions de France attraction will continue to showcase the country’s charm with an 18-minute film.

Walt Disney World’s 50th anniversary takes place in October 2021, so expect to see these new additions in the France pavilion (and other changes around Epcot) around that time.