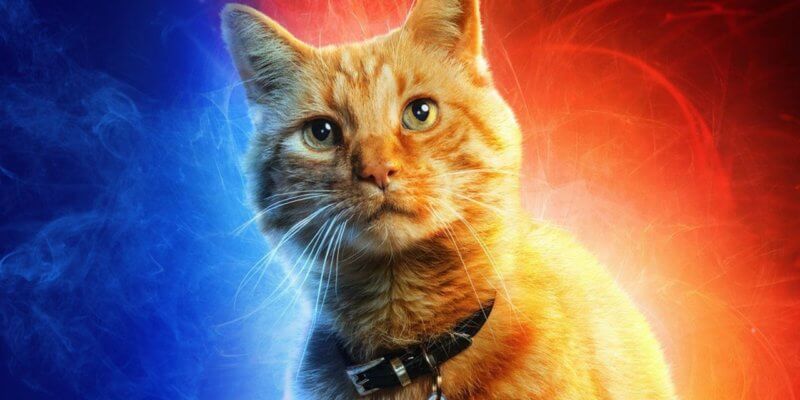 A global box office success, and the introduction to the MCU’s newest superhero, Captain Marvel has taken the world by storm! However, the super suit wearing heroine isn’t the only one from the film getting attention. Goose, the lovable, intergalactic Flerken, seen in the form of a cat, has been raising hairs with fans who are now asking Marvel to give the kitty its own spin-off!

The feline friend first found fame on the internet as the scene-stealing cat who took center stage in “Captain Marvel” when the crew is flying to space to locate Dr. Wendy Lawson’s lost lab. During their trip, the crew experiences weightlessness from zero gravity as they shoot into space. In this scene, Goose can be seen floating in the ship’s cabin both helplessly and adorably.

Even though the cat is incredibly cute, the furry friend is also more than able to pull his own weight, which he does in the film, as the cat actively helps Captain Marvel and her team in their fight against the Kree military on several occasions.

Not to give too much more away from the film, at the end of the movie, Goose is left in limbo as Captain Marvel ultimately just picks up and leaves the feline at home with Nick Fury. And because of this, fans of the rising miniature Marvel star can’t help but wonder if there’s more for this cat to be doing for the universe than just sitting and waiting around for Captain Marvel’s return?

In a series of tweets that are now populating the internet, fans have shared their hopes for a possible spin-off for the cat while Captain Marvel’s away.

Does Nick Fury still have Goose? I'm hoping THAT is the buddy spinoff.

#CaptainMarvel I really kind of want Goose/Chewie spin off movie because clearly the Tesseract & Fury were left behind. So living with Maria & Monica? Followed Carol? Something else? pic.twitter.com/wUAKzesg50

We need a spinoff film with talos goose and luis imagine

I want a Lashana Lynch, Annette Benning, and Goose spin off. I don't care if it doesn't make sense.

If we don't get a spin off of The Continuing Adventures Of Fury And Goose, I will be very disappointed (all episodes consist of saving kitties from peril and Fury taking them home so he can love them).

I can’t stop thinking about Goose since watching #CaptainMarvel – can he a get a movie? That’s a spin off I’d love to see. He could team up with Rocket – It would be the most awesome movie ever! pic.twitter.com/RhusIGny3R

I need a Goose, Rocket & Groot spin off. Falcon can come too I guess. Also Loki but he has to stay disguised as a snake the entire time (except for emergencies).

From “Captain Marvel,” Goose really has been able to take the world by storm, becoming one of Marvel’s most famous animals. However, there has also never been an entire spin-off series for an animal.

As much many as fans would love to see Goose get his own series, the possibilities at this point are definitely not in favor of the cat. However, we’re more than likely to see the feline friend in future films! Especially since “Captain Marvel” just recently surpassed $600 million at the box office.

Could we possibly see Goose as soon as “Avengers: Endgame”? Maybe, but I wouldn’t bet my catnip just yet.

Would you pay to see a spin-off film starring Goose from Marvel’s “Captain Marvel” film? Let us know in the comments below!