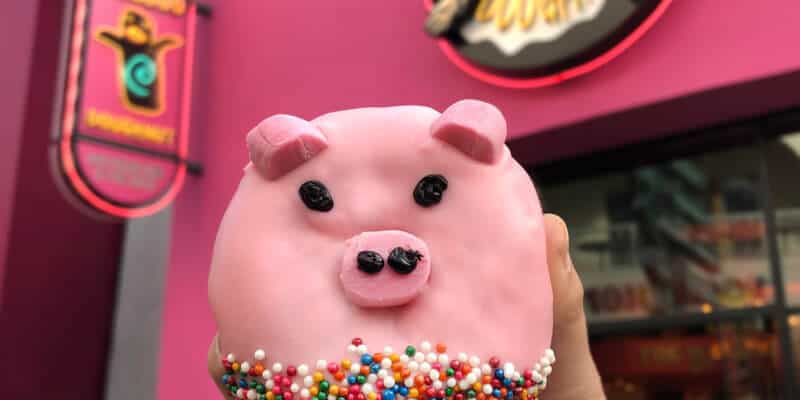 Voodoo Doughnut at Universal CityWalk Hollywood has an array of delicious doughnuts year-round, but for a limited time, they’re rolling out a special Year of the Pig Doughnut to celebrate Lunar New Year.

Available from February 1 – 28, 2019, at Universal Studios Hollywood, this doughnut features strawberry frosting on plain cake with bubble gum for the ears and nose. Starting the Lunar New Year with a deliciously decadent treat sounds pretty perfect, so head over to Voodoo Doughnut before these disappear.

While you’re visiting Universal Studios Hollywood, there are plenty of other Lunar New Year celebrations taking place from February 2 – 18, 2019. The special event is included with theme park admission and features characters from DreamWorks’ “Kung Fu Panda.” Take part in an interactive Dragon Warriors kung fu training show, visit Mr. Ping’s Noodle Shop and meet Mr. Ping himself, and enjoy meet-and-greets with other characters like Hello Kitty and a Mandarin-speaking Megatron from “Transformers.” You can also share New Year’s wishes at stunning plum blossom Wishing Trees and catch other live entertainment and activities.

Voodoo Doughnut, a Portland-based shop, is well-known for their unique doughnut creations. Popular choices include the Grape Ape (a raised yeast doughnut with vanilla frosting, grape dust, and lavender sprinkles) and the Voodoo Doll (a raised yeast doughnut shaped like a voodoo doll, filled with raspberry jelly and topped with chocolate frosting and a pretzel stake). So, even if you don’t make it to Voodoo Doughnut in time to try the Year of the Pig creation, there are plenty of other tempting varieties to satisfy a sweet tooth. There’s also a Voodoo Doughnut at Universal CityWalk Orlando.

For more information on Lunar New Year festivities at Universal Studios Hollywood, head over to their official website.