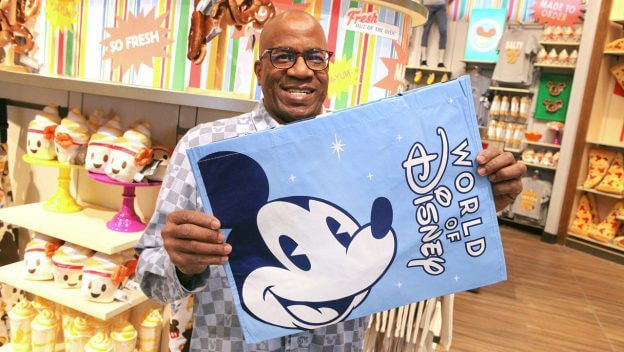 Shopping at Disney Parks just got a little more eco-friendly! Walt Disney World and Disneyland Resort have introduced a line of reusable shopping bags featuring character designs and icons from both coasts.

Available in three sizes as an alternative to plastic shopping bags, these reusable bags can be purchased for a small fee at Walt Disney World or Disneyland Resort. The bags are made from 80% recycled material and help minimize single-use plastic waste across Disney Parks. They’re easy to stash in your luggage to use during Disney vacations, and once you’re home, you can keep using them for day-to-day errands. For example, who wouldn’t love a bit of Disney magic while grocery shopping?

At Walt Disney World, in addition to the current World of Disney bag, there are six other bags: one for each of the four theme parks, one for owned-and-operated shops at Disney Springs, and a shared Walt Disney World Resort-inspired bag for Resort Hotels, ESPN Wide World of Sports Complex and other merchandise locations.

This step is part of Disney’s ongoing commitment to reduce plastic waste at their owned-and-operated locations across the globe. Last year, Disney announced plans to eliminate single-use plastic straws and stirrers at their locations around the world by mid-2019. In addition, the company plans to transition to refillable in-room amenities in their hotels and cruise ships over the next few years.

Will you purchase one or more of these new reusable bags on your next Disney vacation? Let us know in the comments below!