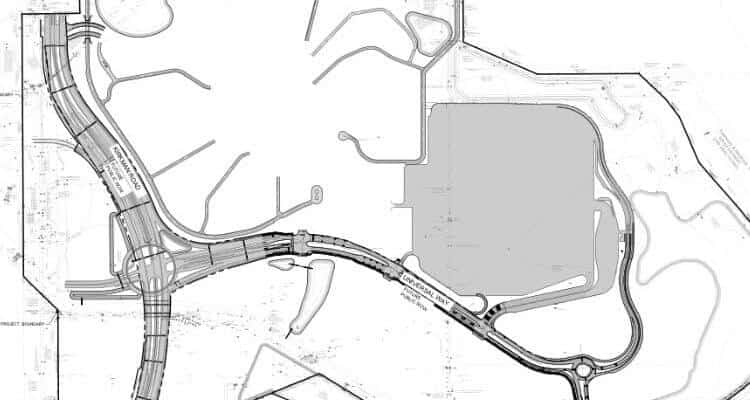 Universal Orlando Resort filed revised drawings to Orange County today for the infrastructure of their new theme park currently under development near the Orange County Convention Center, which offered fans insight on some possibilities of the new park.

According to WFTV, the drawings are related to the Kirkman Road extension currently under construction in Orange County. Work on the section of road by the new park first began in November and is scheduled to be complete by mid-2020.

July of last year was when it was first revealed that Comcast was looking to create a fourth theme park at the Universal Orlando Resort. At the time, all that had been revealed was that the park would possibly be named “Fantastic Worlds,” as reported by the Orlando Sentinel, which is what is believed to be pictured in these new images.

Rumored and unconfirmed reports of the project by Orlando Park Stop believe the theme park will follow a classic hub and spoke design, similar to that of Disneyland or the Magic Kingdom, where a central plaza area leads off into different themed worlds in multiple directions, which from these images, could be a possibility.

Universal’s more recent theme parks use a circular design that allows guests to walk through each themed area, one after the other while circling back to the park entrance.

Universal has not officially announced any plans for the project, nor has it confirmed any design ideas.

What are your thoughts on a new theme park coming to Universal Orlando Resort? Let us know in the comments below!