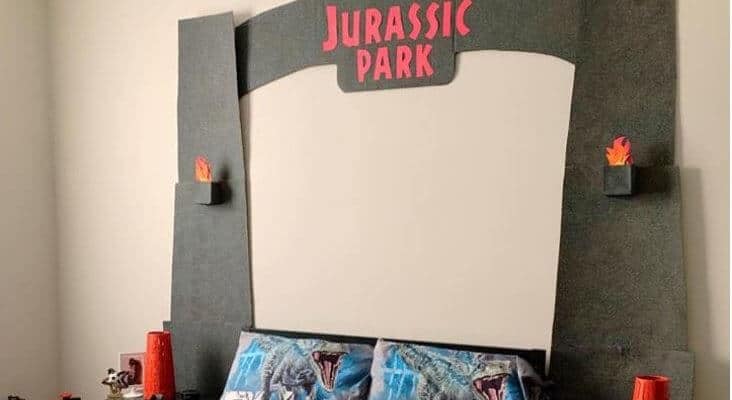 Frequent visitors to Universal Orlando Resort, Sherryl and her family (husband and two sons) found themselves at Islands of Adventure to celebrate one of their son’s birthdays. Prompted by the park’s immersive prehistoric environment, her son expressed his desire to take the ambiance home with him. . . 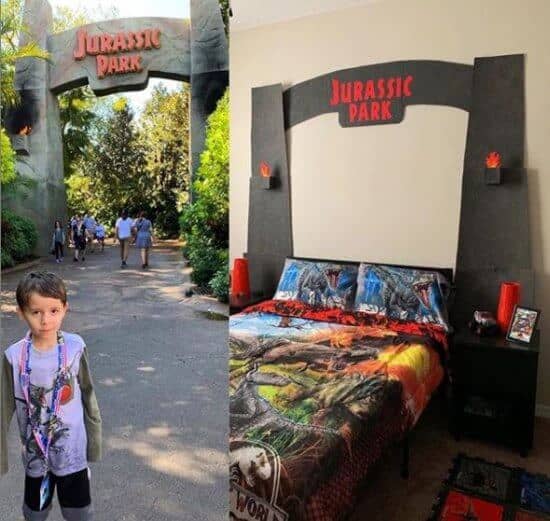 An 8-year veteran, skilled at the art of inspiring 4th Graders, teacher Sherryl Ogden is no stranger to at home Imagineering. Having already crafted a Spider-man/Toy-story room, taking the 5-year-old’s birthday request set her creative powers to work. 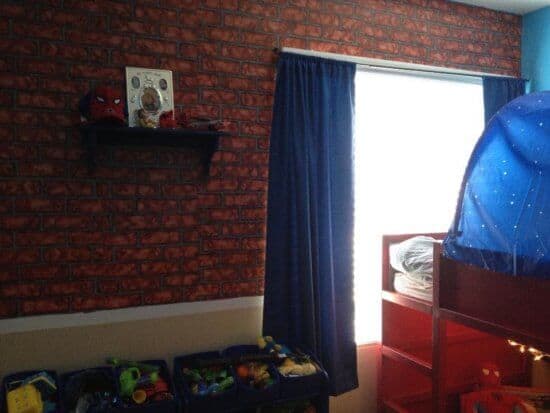 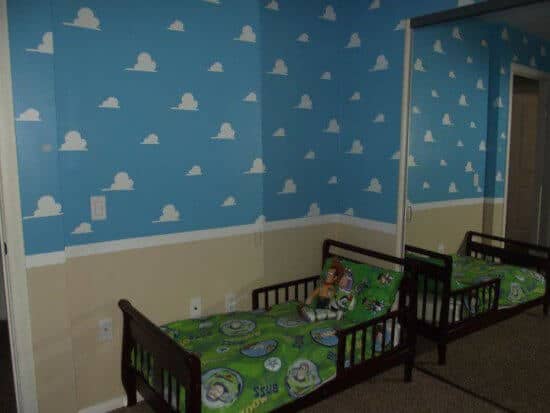 When she shared the results of her labor, it caught our eye and had to know more. Thus, we reached to ask a few questions:

Inside the Magic (ITM): Where did you draw your inspiration for this latest Jurassic Park powered project?

Sherryl Ogden (SO): My youngest son, 5, was the sole inspiration for this room. He had recently developed an affinity for all things Jurassic Park/World and dinosaur related. For his 5th birthday, we decided to update his room from toddler to big boy and his dream was to have a “Jurassic room.” Everywhere I searched online I found bedspreads, toy bins, and numerous other textiles with dinosaurs on it, but nothing that really made me think his room would feel like it was an immersive experience (which is what I was ultimately going for). Finally, after one of our many weekend trips up to Universal with our annual passes, I stood under the Jurassic Park entrance and said to my husband “I think I can recreate this.” My husband, God Bless his patient soul, knows that it’s better to go along with my hair-brained schemes and replied “I have no doubt in my mind that you can. I can’t wait to see how this project turns out.” And then I began to scheme and plan and plan and scheme . . . 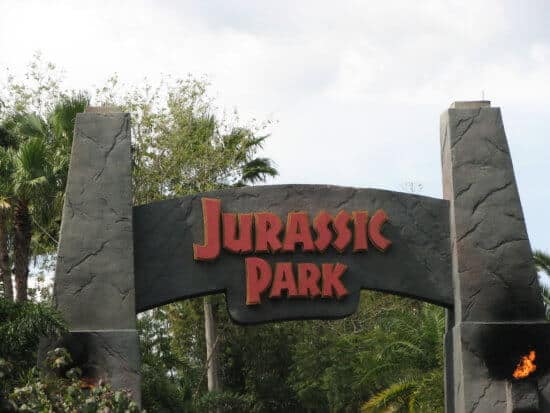 ITM: Did you make the items for this Jurassic Park bedroom? If not, where did you get them?

SO: I decided to use leftover cardboard from all of the new furniture I had purchased for my son’s new room. I had some very long boxes and stenciled the design by hand onto the different cardboard pieces. Halfway through I realized that measurement was necessary, THANK GOODNESS I CAUGHT THAT, I was just a tad overzealous to get the project underway. After I made certain the height and width would frame his bed, I used a box cutter to cut out the frame. The next step was turning the yucky brown cardboard into something that resembled stone. **Flashback to my parents 1990’s decor and how they would restore thrift store items using stone spray paint from the local home improvement store** Krylon’s Black obsidian spray paint had just the right effect I was going for. I sprayed the cardboard pieces with 2 coats and let them air dry. From there I had to secure the cardboard pieces to the wall but I wanted to make sure they were removable for any future room remodeling…thank you Command Velcro Picture Hanging Strips! I put at least two on each portion of cardboard and they are there to stay for the foreseeable future. 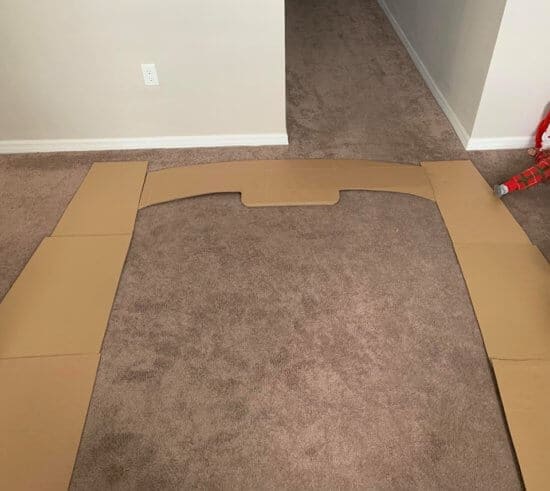 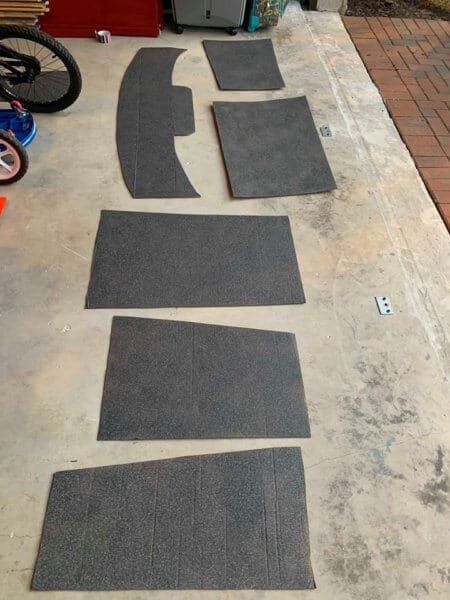 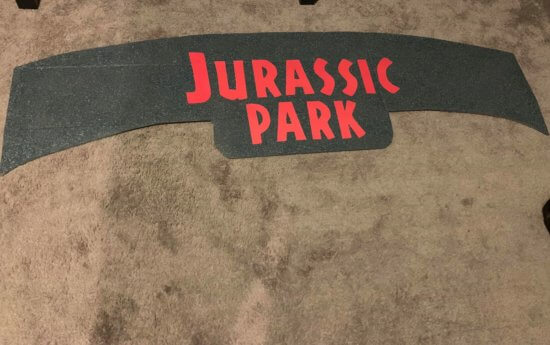 ITM: Once your Jurassic Park project was completed, what item(s) brought the most joy?

SO: My favorite items in the room are the little details I added to make the room come to life such as the fake flame sconces and the picture of my son riding the Jurassic Park River Adventure for the first time. 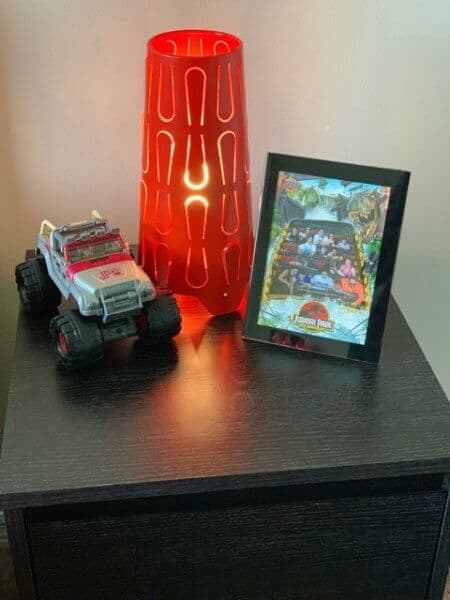 A special part about this room that makes it truly immersive is the fact that my son asked for an echo dot so that he could tell “Alexa” to change the Phillips Hue light bulb colors in his room. As I worked on his room, I realized that I could set a routine for the room on the Amazon app. As a result, when you say “Alexa, welcome to Jurassic Park” His lights turn red and the Jurassic Park theme music turns on.

ITM: Now that you’ve completed this perfect prehistoric project, what’s next for the Ogden home?

SO: My future plans for themed decor include a Harry Potter themed loft I have been working on, a Nintendo themed room for my oldest son, 9, and a Sapphire Falls island themed master bedroom. 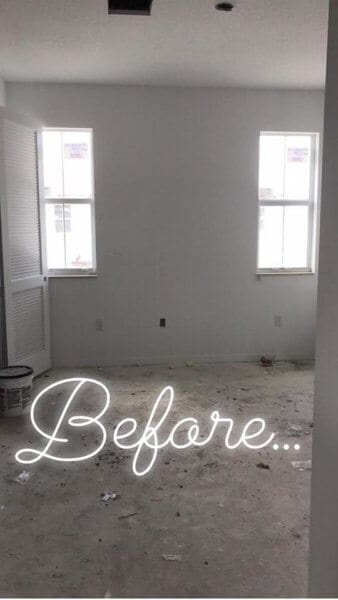 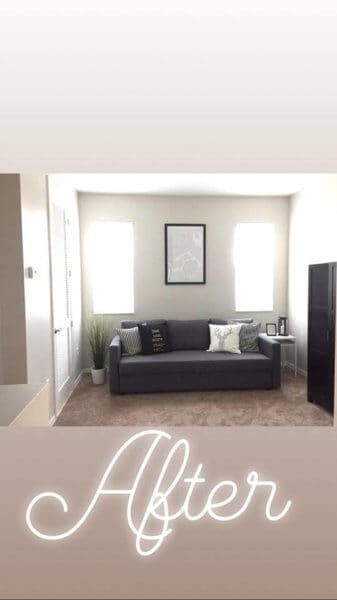 Inside the Magic would like to thank Sherryl Ogden for sharing her Jurassic Park bedroom creation with our readers. At home Imagineering fans seeking further inspiration can check out Sherryl’s Instagram page. 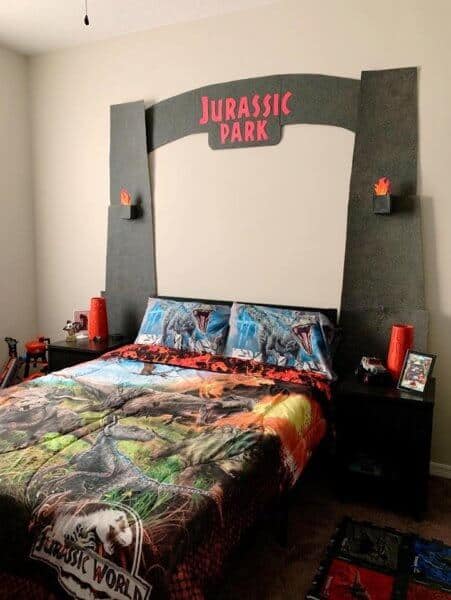 Do you have a home-grown POP culture, movie or theme park project you’d like to share with the readers of Inside the Magic?  If so, please contact Michael Gavin with details.

Comments Off on At Home Imagineering: Jurassic Park Bedroom