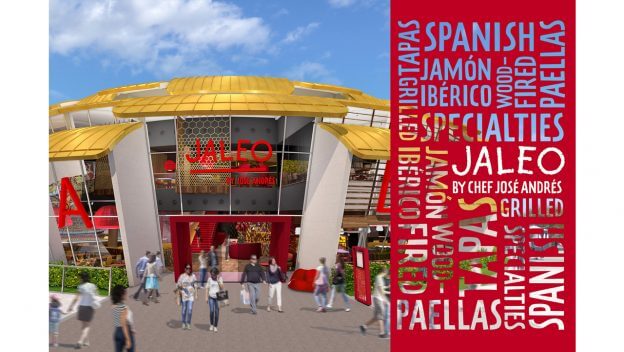 Jaleo, from chef José Andrés, opens soon at Disney Springs, and this week new details and the restaurant’s dynamic design were revealed.

Scheduled to debut this winter, Jaleo’s new location at Disney Springs is a 22-thousand square foot restaurant inspired by the culture and cuisine of Spain. The building itself is inspired by the artichoke, a vegetable native to Spain. According to Disney, “The artichoke structure opens up, inviting guests to enter and experience the very best of Spanish cuisine. The petals themselves form pergolas, which extend toward the outdoors.”

The freestanding, two-story building does not have solid walls and it’s open to the outside. Large windows offer views of the lake while guests dine on favorites like tapas and paella and sip on sangria. “There are no cubic forms, no opaque walls, no straight lines: here reigns a plant-like organic structure with its dynamic forms. An avant-garde, expressionist and welcoming architecture,” says Juli Capella, principal at Capella Garcia Arquitectura, on Jaleo’s design.

Inside, the restaurant’s two floors are visually connected by a double height central courtyard. The restaurant offers a large, family-style gathering space with foosball tables, or a more elegant central seating area anchored by an open kitchen and wood fire grill. There are two private terrace dining options: one overlooking the Disney Springs promenade, and one overlooking the lake.

The color palette is citrus-inspired with lots of orange and lemon, and the decor features wood and ceramic materials. Some of the artwork guests will spot inside include “Suit of Lights,” an iconic photo of a bullfighter’s suit from Spanish photographer Rafael Vargas, as well a collage of San Sebastian’s popular Concha beach by photographer Ciuco Gutiérrez.

A quick-service area will be located at the front corner of Jaleo overlooking the main promenade of Disney Springs. Guests can visit the casual restaurant, which is centered around a large mural from painter Marc Jesús, for Spanish street food-inspired sandwiches and salads.

Jaleo’s Disney Springs location was first announced in 2017 along with Wolfgang Puck Bar & Grill, which recently opened. There’s no exact opening date for Jaleo yet, but we’ll update this post when more details are announced.