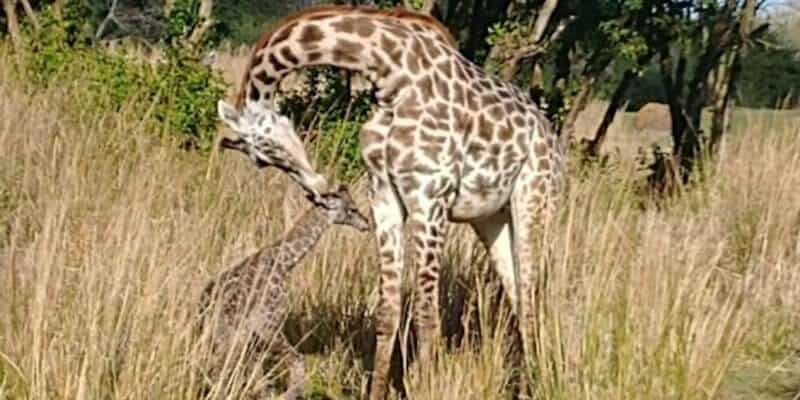 It’s a boy! Disney shared an update and new photo of the baby giraffe born at Disney’s Animal Kingdom earlier this week.

Mom and baby have been doing well since the birth. According to Disney, the pair has been nursing and bonding backstage this week and will remain backstage for the next month or two before returning to the savanna. There’s no doubt the new addition is cute, and this new photo of the calf reveals he has a sweet heart-shaped mark on his neck.

Disney cast members and Kilimanjaro Safaris drivers will help choose a name for the calf, so stay tuned for more updates on the little one.

There’s an adorable new addition to the savanna at Disney’s Animal Kingdom! A baby giraffe was born on Monday, January 14, joining the other amazing animals on Kilimanjaro Safaris.

Born to mom Mara, the new Masai giraffe calf stands around six feet tall. It’s too early to tell the calf’s gender, but mom and baby are bonding well and the calf is out on view to guests. On Monday, some guests caught a glimpse of the calf being born, though safari drivers kept a safe distance from Mara. Kilimanjaro Safaris temporarily closed on Monday afternoon, presumably to make sure mom and baby were happy and healthy.

In addition to the new baby giraffe, several other animals were born at Kilimanjaro Safaris in the past year. In 2018, new additions included the giraffe calves Aella and Amira, the first hippo born at Disney’s Animal Kingdom in over a decade, a mandrill, and an okapi. You can learn more about these adorable animals (and see photos!) here.

As some guests learned on Monday, you never know what you’re going to see on Kilimanjaro Safaris. The attraction allows guests to encounter real African animals in their natural habitat during an 18-minute journey into the Harambe Wildlife Reserve. Kilimanjaro Safaris is experienced in a vehicle with a driver who guides you through the savanna, but those looking to increase the thrills can book the Wild Africa Trek. This 3-hour tour includes walking along a grassland path, crossing a rope bridge, and riding in a safari vehicle while a guide shares insights on the animals and general operation of Disney’s Animal Kingdom.

You can experience Kilimanjaro Safaris at Disney’s Animal Kingdom daily, either by waiting in the standby line or booking a FastPass+ reservation. To experience the Wild Africa Trek, you can book by calling (407) WDW-TOUR. Prices range from $189 – $249.

Be sure to keep an eye out for the many amazing animals during your next expedition on Kilimanjaro Safaris!