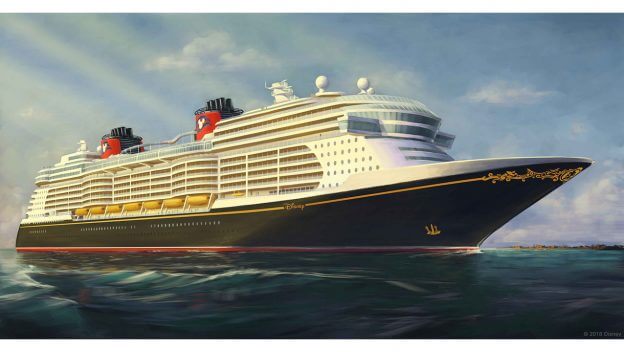 Disney is adding three new ships to their Disney Cruise Line fleet, and new documents reveal that they may be known as “Triton Class.”

Orlando Rising reported earlier this week that new records from Port Canaveral include several mentions of “Triton” in reference to the two new Disney Cruise Line projects at Port Canaveral, one of the two locations in Florida from which Disney Cruise Line ships embark. Take a look at the design below, which was attached to a “waterside engineering design and permitting services” document that labels the ship with the placeholder name of “Disney Triton,” and the class as “Triton Class.”

Though it may be a placeholder name according to Orlando Rising, the new name may come as a shock to Disney Cruise Line fans and frequent guests. It certainly doesn’t have the same magical connotation as the names of the other four ships in the current fleet: Magic, Wonder, Dream, and Fantasy.

But while Triton may not fit in exactly with the names of the current ships, it does pay homage to King Triton, the ruler of the sea and father of Ariel from “The Little Mermaid.” Any fan of the classic Disney film and Disney attraction knows that King Triton is certainly one of the most powerful characters in Disney history. Not only is he physically strong, but he is also the wielder of a powerful object that possesses highly desirable magic. Given King Triton’s reputation as an iconic Disney powerhouse (and the ruler of the sea), it would be fitting for Disney Cruise Line to name their newest ships after such a character. We wonder if the other two ships in the Triton Class will be named after other remarkable Disney icons.

The new name also makes sense considering the projected size of the new ships. Disney announced early last year that the three new ships in the Disney Cruise Line fleet will be massive. Each new ship will be around 140,000 gross tons, making them larger than the Disney Dream and Disney Fantasy, which are already the largest of the four current ships. The new ships will also accommodate the same number of guests as the Dream and Fantasy (1,250 staterooms each), despite the larger size.

But why would Disney increase the size of the ships if they won’t add more staterooms? Well, a larger ship means more common areas and amenities for guests to enjoy. One example is the AquaDuck, the epic waterslide on the two larger Disney Cruise Line ships. Admittedly, from our experience at Inside the Magic, the AquaDuck is much better and longer aboard the larger ships (the Dream and Fantasy) than the AquaDunk, the shorter version of the slide aboard the smaller ships (the Magic and Wonder).

What would you like to see added to the massive new ships in Disney Cruise Line’s “Triton Class”? Let us know!