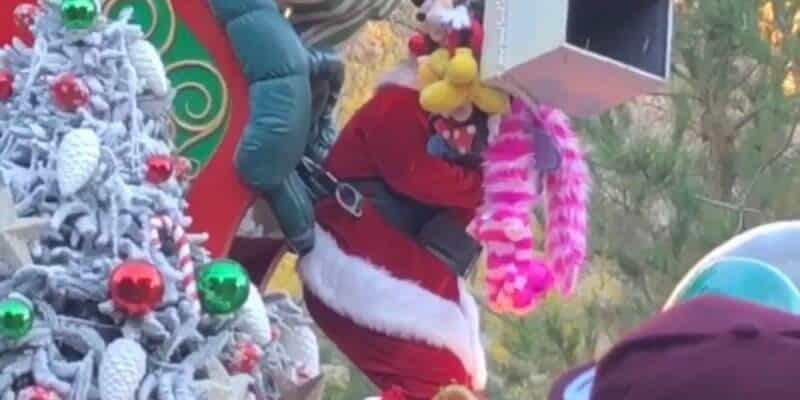 Over the weekend, Santa was launched out of his sleigh during A Christmas Fantasy Parade at Disneyland park after a parade float collapsed, leaving Santa in a not-so-merry predicament.

The holidays have always been a tough time for old St. Nick, but this past weekend at Disneyland Resort presented Mr. Claus with an all-new challenge,  one that left him hanging in midair in need of rescue from his elves.

The sleigh Santa was riding on during Disneyland park’s holiday parade “A Christmas Fantasy Parade” broke during the show and launched him right out of his seat. The unexpected incident left Santa dangling only by his safety harness while he waited for cast members to help him down.

Saw Santa almost die at Disneyland today. His sleigh broke and he was hanging by his harness. #disneyland #christmasfantasy #santa #disneylandsanta (For licensing or usage, contact: licensing@viralhog.com)

Visitors at the theme park posted video recordings of the accident (seen above), which show Santa remaining calm as he hung not too far from the ground. In the video above, Santa can even be heard laughing cheerily as he hangs helplessly.

It was reported that once Santa was removed from his safety harness, he did continue to walk the rest of the parade route, smiling at guests and spreading Christmas cheer with his sleigh following closely behind.

The accident did delay the parade, but it’s been reported that no one was injured by the collapse of the float.

A Christmas Fantasy Parade runs twice daily during the holidays at Disneyland park and offers guests the chance to see their favorite characters decked out in stunning holiday attire. As part of the parade’s grand-finale, guests get the chance to see Santa as he makes his sleigh ride through the park.

Disney has not commented on whether or not Santa’s sleigh will be repaired in time to run in the rest of the parades to come through the end of the holiday celebrations at the park.