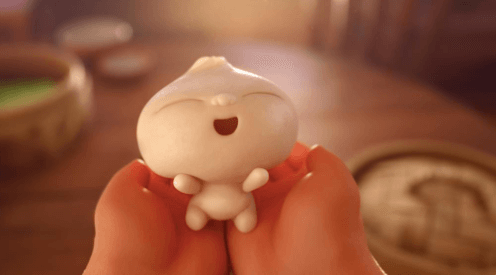 Disney-Pixar’s “Bao,” the heartwarming short film that played in theaters with “Incredibles 2” this summer, recently made the shortlist for Best Animated Short at the 2019 Academy Awards. To celebrate, Disney-Pixar is streaming “Bao” on YouTube this week. If you missed this quirky animated short in theaters, now’s your chance to enjoy!

Steams become reality! Our latest short, “Bao,” is streaming online for one week only. Watch it now: https://t.co/sX3DUB5Ij3 pic.twitter.com/92MrwVOfN2

Directed by Domee Shi, “Bao” tells the story of an aging Chinese woman suffering from empty nest syndrome until one of her adorable homemade dumplings comes to life. Not only is the short full of stunning food visuals (you’ll definitely be hungry after watching), it also has a lot of emotion packed into under 8 minutes. Watch the full short below.

The final list of contenders for Best Animated Short at next year’s Oscars will be revealed on January 22, and we’ve got our fingers crossed for the lovely “Bao.”

If you loved the short, you can purchase it along with the “Incredibles 2” home release. The movie is out on Digital, Blu-ray, and DVD now, and you can find more information here.

You can enjoy “Bao” streaming on YouTube for the rest of this week!