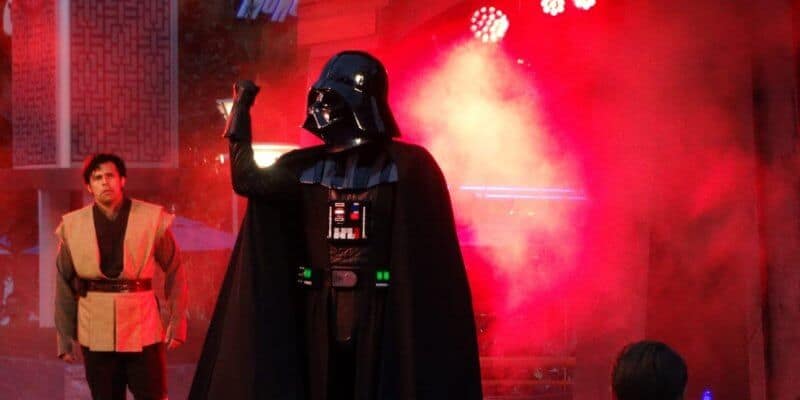 Preparing younglings to face the dark side of the force first found its way into Disney parks in October of 2006. The first Jedi Training Academy, as it was originally known, taught the ways of the force in Tomorrowland at the Disneyland Resort in Anaheim, California.

Today the adventure is known as “Jedi Training: Trials of the Temple.” While the California version closed shop on November 4th, 2018 (in anticipation of  Star Wars: Galaxy’s Edge), would-be-Jedi Knights can still receive instruction at Disney parks in Florida, Paris, and Hong Kong.

Star Wars weekends, with special entertainment from the galaxy far, far away, would descend upon Disney’s Hollywood Studios in late spring/early summers for several years (1997, 2000, 2001, 2003-2015). Disney characters would don disguises based upon the “Star Wars” franchise, villains and heroes would wander the park, celebrities made appearances and special merchandise was offered. Exciting entertainment, like the Hyperspace Hoopla and Jedi Training Academy, also arrived. 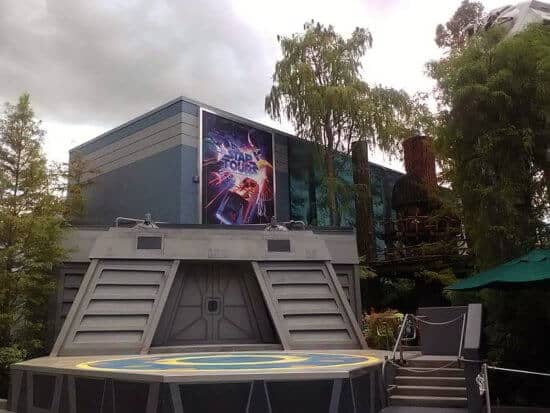 During the 20-minute mini class, children ages 4 – 12 years old are offered the opportunity to train with a Jedi Master. Clad in Jedi robes, lightsaber in hand (both provided during the exercises), these 16 younglings learn the ways of the force and are taught parrying maneuvers for lightsaber combat.

Training was interrupted by the arrival of Darth Maul, Darth Vader, and Stormtroopers. Each student was then guided in how to fend off the villains. Once Maul and/or Vader are defeated and the troopers have fled the scene, recruits were promoted to the status of Padawan. As each returned their robe and saber, diplomas were issued. 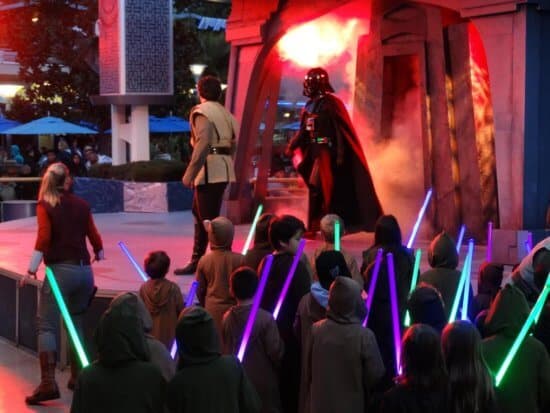 Permanent installations (vs special event stages) of Jedi Training Academy opened at both Disneyland and the Walt Disney World Resort. In Anaheim, CA, training took place in Tomorrowland; while in Florida, recruits were taught near Star Tours, in the Echo Lake area of Disney’s Hollywood Studios on October 9, 2007. Both “original” versions of Jedi Training Academy were closed in 2015 to make way for updated versions which included more of the “Star Wars” galaxy. 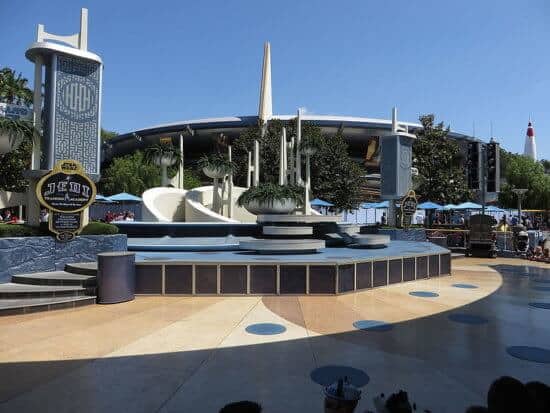 Trials of the Temple

2015 brought changes to the Academy as well as an additional location.  Jedi Training: Trials of the Temple began accepting younglings on July 11, 2015, in Discoveryland at Disneyland Paris. The revised adventure also arrived at Disney’s Hollywood Studios (Echo Lake area) on December 1, 2015, and in Tomorrowland at Disneyland park in California on December 8, 2015. Hong Kong Disneyland received their edition of the Academy the following year, in June. 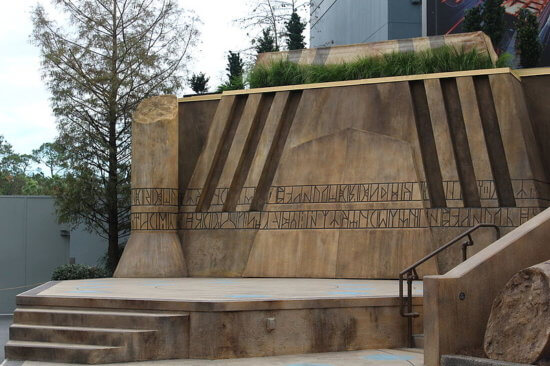 Training of younglings continues to be conducted by a Jedi Master and their apprentice: Vanzell Mar-Klar (master) and Nedriss Narr (apprentice).  Darth Vader also continues to vex the class, but a new villain joins the stage for combat. Initially, from “Star Wars Rebels,” The Seventh Sister helped students (and apprentice) face their fears. Now that role falls to none other than Kylo Ren!

Once the students have all had the opportunity to face off with either Vader or Ren, villains are forced to return within the Temple via a collective Force push, but the adventure is far from over. At the urging of Yoda and encouragement of students, apprentice Nedriss engages Kylo Ren for a final showdown. Ultimately Ren is defeated as evidenced by another of his infamous temper tantrums. 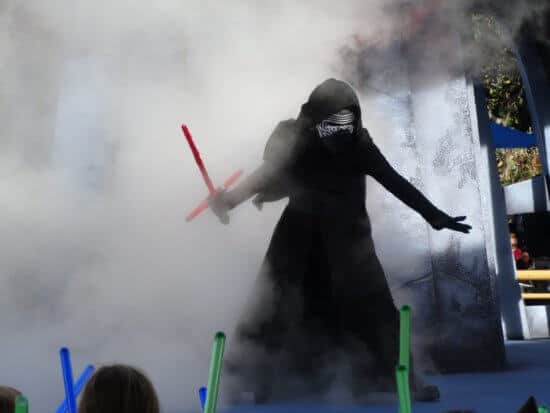 With both villains now pushed back within the temple, trials are complete. Students, no officially Padawan, return their robes and lightsabers to receive diplomas designating their new “Star Wars” status.

As participation in Jedi Training is quite popular, registering younglings ahead of time is required. Registration is on a first come – first served basis. 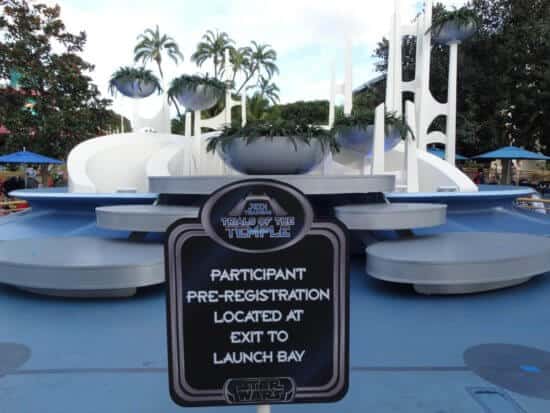 At Disney’s Hollywood Studios, younglings between ages 4-12 may sign up at the Indiana Jones Adventure Outpost and also at the 50’s Prime Time Café. Opportunities for the various daily classes open up with the start of park hours.

NOTE: at this time Disneyland Paris official website does not list Jedi Training as an entertainment option (there is no indication of its return) 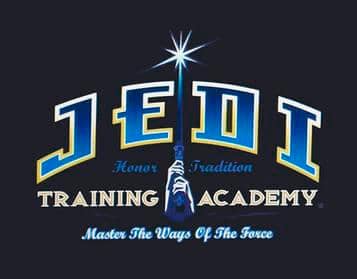 Hong Kong Disneyland still shows Seventh Sister as well as Kylo Ren (along with Darth Vader) as villains appearing as part of the Jedi Training: Trials of the Temple entertainment. Younglings from ages 4 to 12 are welcome to register for Jedi training. All must be present at the time of sign up, which is on a first come – first served basis. Registration commences as soon as the park opens for the day and is located next to Hyperspace Mountain (Tomorrowland). 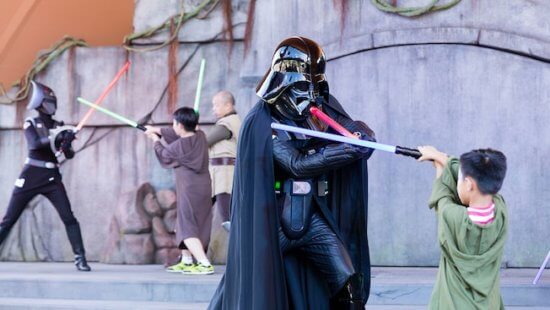 “Kylo Ren – student of the Supreme Leader Snoke – and his unconventional lightsaber seeks to destroy the New Republic, the Resistance and the legacy of the Jedi. Kylo Ren is strong with the force. Will any of the new recruits or the masterful Jedi’s, be both skillful and brave enough to face this new menacingly vengeful opponent?” – Hong Kong Disneyland

Not every youngling has the desire to do good and become a Jedi. As evidenced in this endearing encounter filmed at Disneyland in 2015, one particular young lady favors Darth Vader:

“Star Wars” is about to take on a much more prominent role at Disney parks in California and Florida. As it has already done at Disneyland in Anaheim, Jedi Training: Trials of the Temple, could eventually close making way for the arrival of Galaxy’s Edge (landing at Disney’s Hollywood Studios in 2019). 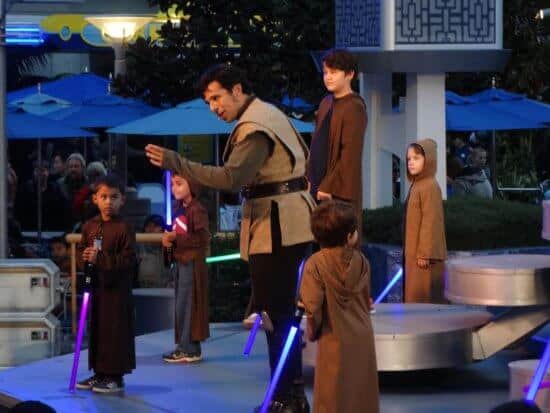 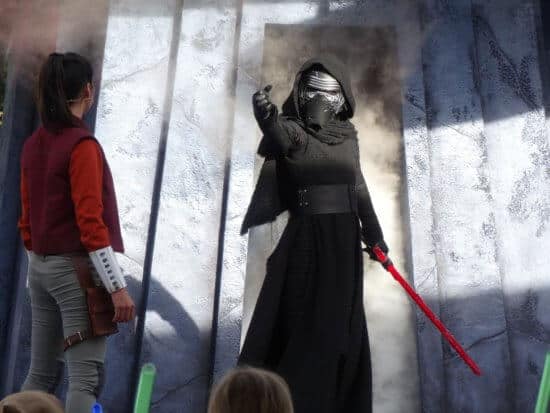 As participation is on a first come – first served basis, plan at arriving in time for park opening and ensure that all who wish to train with the Jedi master are on hand to sign up.

Comments Off on Inside the Magic of Disney Parks Jedi Training: Trials of the Temple