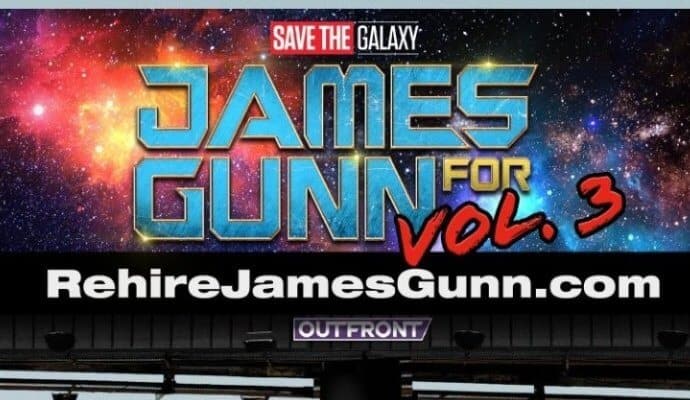 A large billboard prompting Disney to rehire James Gunn for the third installment of the “Guardians of the Galaxy” series has appeared just miles from Disneyland Resort in Anaheim, CA.

The billboard, which reads “Save the Galaxy: James Gunn for Vol. 3,” was installed as the product of a GoFundMe fundraiser to prompt Disney to reinstate James Gunn as the director of “Guardians of the Galaxy Volume 3.” The GoFundMe campaign was started under the username Gio Mustang, whose identity has remained anonymous.

The GoFundMe page describes the group’s motivation for installing the billboard, as well as their current locations outside the U.S. Disney theme parks.

Located just a few miles away from Disneyland, we’re aiming for this to be shared on Social Media, and maybe get some press coverage, but we’d also love to see this billboard create a destination for Gunn supporters to visit and maybe grab a photo in front of to post their support. It’s visible off the 22 Eastbound Freeway just before the Harbor Blvd. exit, and is located at the corner of Task & Newhope in Garden Grove, California. If you map it you can get there using the address 13541 Newhope Street, Garden Grove, CA 92843

The campaign materialized due to the organization of “Guardians” stars and fans who disagreed with Disney’s decision to fire James Gunn as the director for the third “Guardians of the Galaxy” film. Gunn was fired back in July after some controversial Twitter posts from his past resurfaced.

At the time, Disney stated that the company could not continue its relationship with Gunn after his Tweets resurfaced. “The offensive attitudes and statements discovered on James’ Twitter feed are indefensible and inconsistent with our studio’s values, and we have severed our business relationship with him,” said Alan Horn, Walt Disney Studios chairman.

Since Gunn was fired this past summer, stars and fans of the “Guardians of the Galaxy” films have expressed their disagreement with Disney’s decision. The cast of the films took to Instagram to publish an open letter in support of Gun:

Although I don’t support James Gunn’s inappropriate jokes from years ago, he is a good man. I’d personally love to see him reinstated as director of Volume 3. If you please, read the following statement- signed by our entire cast.

The GoFundMe has raised over $5,000 since the page started in late September, with the goal of raising a total of $12,000 or more. It is unclear how long the billboard will remain on display, but the GoFundMe states that the group hopes to keep it up through the holiday season.

The GoFundMe campaign isn’t the only way fans have expressed their distaste toward Disney’s decision to fire Gunn. A petition on Change.org currently has almost 500,000 signatures calling for the rehiring of Gunn. The petition’s organizer, Chance Edwards, states on the website that although he realizes the petition will likely not change Disney’s decision, he hopes that it will persuade Disney to “realize the mistake they made and not make it again in the future.”

Visit RehireJamesGunn.com to read more about the campaign.