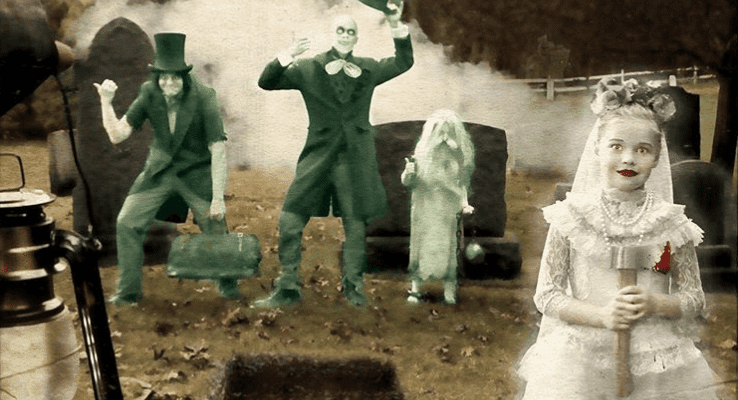 Beware of hitchhiking ghosts! Neil Patrick Harris and David Burtka never disappoint on Halloween, and this year, the couple and their family materialized as grim grinning ghosts out to socialize. Harris, Burtka, and their two children recreated the looks of four ghosts from the frightfully fun Haunted Mansion attraction at Disneyland and Walt Disney World.

Welcome, foolish mortals. We hope your Halloween is happily haunted, but heed this warning: beware of Hitchhiking Ghosts! @nph

While the family’s costumes are nearly impossible to distinguish from the animatronics within the popular Disney attraction, the scene in which they recreated the characters is what truly makes these family pictures epic. The foursome had a photoshoot in a real graveyard to get into character and capture the Halloween spirit that the Disney ride embodies year round. In the background, Burtka, Harris, and Gideon accurately portray the hitchhiking ghosts, their costumes and expressions almost indistinguishable from those of the ride. But we have to admit: Harper’s Constance Hatchaway portrayal definitely makes her the star of the show, with her bloody axe and wide-eyed look that envies that of the attraction’s animatronic.

If you’re as big of a Haunted Mansion fan as we are, you wouldn’t miss perhaps the best hidden element of the photoshoot. Not to be overlooked is the hand and lantern included in the foreground of the shot, mimicking that of the terrified gravedigger within the ride. You’ve got to applaud this family’s accuracy to Disney Imagineering!

Harris shared some behind-the-scenes pictures of the day of the family’s Halloween photo shoot, even including how they achieved each character’s signature look, with up-close shots of the wigs and makeup. Scroll through the slideshow below to even catch a glimpse at how their daughter perfected Constance Hatchaway’s menacing smile.

Behind the scene shots of our Halloween photo shoot. It was a hectic day of applying makeup and crossing fingers, hoping all the spooky stars align. Hope you think they did. Check out the final shot at David’s account: @dbelicious

The Hollywood Reported reported that this isn’t the first time Harris has expressed his love for the Haunted Mansion attraction. Back in April, he appeared in an interview on “The Late Show,” during which he shared his affinity for the ride.

The family’s depiction of the Haunted Mansion isn’t the only time they have portrayed Disney characters for Halloween. In years past, they have dressed as adorable “Alice in Wonderland” characters, with their twin children as Alice and the White Rabbit, and they have recreated scenes from “Star Wars,” as well.

The family’s portrayal of the fan-favorite ghosts from the Haunted Mansion definitely have us wanting to “hurry baaaaack” to the Disney Parks so we can ride it this fall. We’ve got to hand it to them for this year’s dedication to their favorite Disney attraction; it’s definitely our favorite costume of 2018.

What do you think of this family’s Haunted Mansion Halloween costumes? Let us know in the comments below!