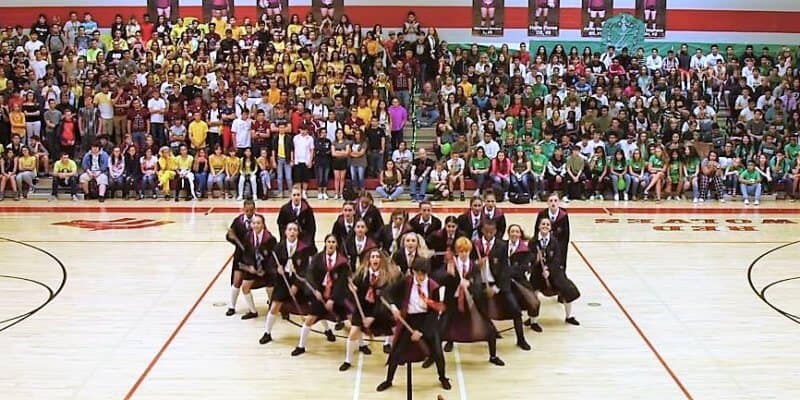 From the first letter of acceptance to the battle of Hogwarts, Harry Potter’s journey through the Wizarding World wowed with whirling wonderful performance precision. Expertly flowing from scene to scene, this high school homecoming happening could easily be at home in any major theme park.

Familiar sounds of “Hedwig’s Theme” from the Harry Potter movies balanced brilliant routines to songs like “Chun-Li” from Nicki Minaj. The entire six and half minute rendition rocked the house as scores of students assumed the roles of heroic Hogwarts wizards and dangerous Death Eaters. From the moment Harry emerged from under the stairs to his showdown with He-who-must-not-be-named, creative choreography matched with memorable magical moments provide the perfect musical summary to J.K. Rowling’s seven-book series.

PAC’s YouTube channel is stocked with exciting examples of their drive for excellence. Disney-Pixar fans should enjoy this homecoming hit from 2016:

Walden Grove High School, located in Sahuarita Arizona, is a relatively new public education establishment. Established in 2011, Walden Grove High hosts over 1000 students (2015 numbers).  Their motto, “Be More Than You Think You Are,” clearly resounds throughout the September 28th Harry Potter Homecoming performance.