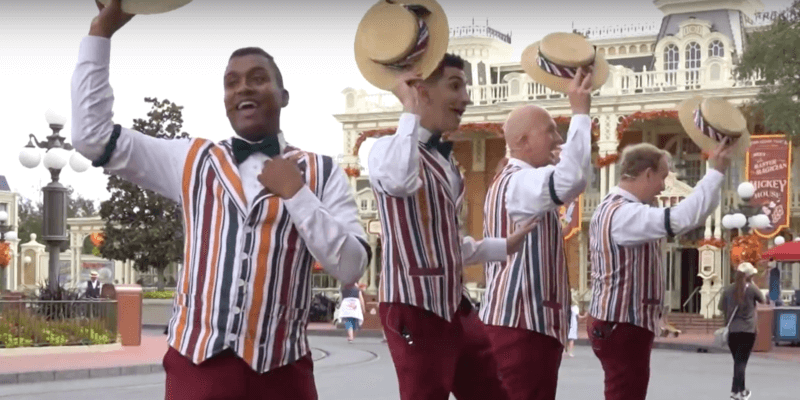 Found at both Disneyland and Walt Disney World’s Magic Kingdom, The Dapper Dans are best known for serenading park guests with classic songs. Today, this beloved a cappella group is an iconic and quintessential entertainment offering at Disney Parks, as this quartet’s chipper tunes are full of memories and nostalgia from both Disneyland’s and Walt Disney World’s simpler beginnings.

Nowhere in the world can you enjoy the harmonies of these talented performers, who can always be found in their colorful pinstriped suits, straw hats, and taps. With only their voices, Deagan Organ Chimes and tap shoes, they’re able to put on a performance to brighten any guest’s day in one of the parks.

In Walt Disney World’s Magic Kingdom, you can always find them on a horse-drawn trolley in the morning, and all over Main Street, U.S.A., during the afternoon. At Disneyland, the band can be found on their custom Schwinn four-seater bicycle and in various locations around Main Street, U.S.A.

Currently, you can hear the group singing some of these songs:

If you want to catch The Dapper Dans for yourself the next time you’re in the Magic Kingdom Park or Disneyland park, be sure to see them during one of their several performances throughout the day. You can find their full show times on both the Walt Disney World and Disneyland Resort websites.