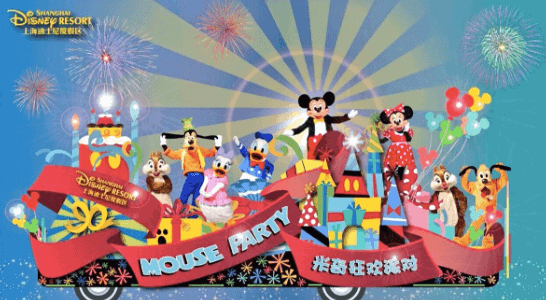 For the fifth consecutive year, Shanghai Disney Resort brings some of its patented Disney magic to the Shanghai Tourism Festival. This year, the resort will lead the float parade with the newly designed Mouse Party float, which will be helmed by Mickey Mouse and friends.

The new float debuts on Saturday, September 15 at the 2018 Shanghai Tourism Festival’s Grand Opening Parade. Featuring a colorful party theme, the float includes glowing stars, Mickey-shaped balloons, a spinning cake with Mickey-inspired elements, and an illuminated castle made from festive party hats. Mickey Mouse himself will appear at the center of the float surrounded by Minnie Mouse, Donald Duck, Daisy Duck, Goofy, Pluto, and those troublesome chipmunks Chip ‘n’ Dale.

The Mouse Party float will also be decorated with gifts from Mickey and friends, all wrapped up in large red ribbons. Alongside the float, twenty Disney performers will dance to the song “It Began With a Mouse,” entertaining festival attendees and millions of TV viewers across China.

After the new float makes its debut on September 15, it will bring the party across the city from September 16 – October 6, allowing more residents and tourists to see it in person.

Then on October 6, for the first time ever, the Shanghai Tourism Festival’s closing ceremony will be held at Disneytown at Shanghai Disney Resort.

To learn more about the Shanghai Tourism Festival, click here. For more information on Shanghai Disney Resort, head over to its official website.