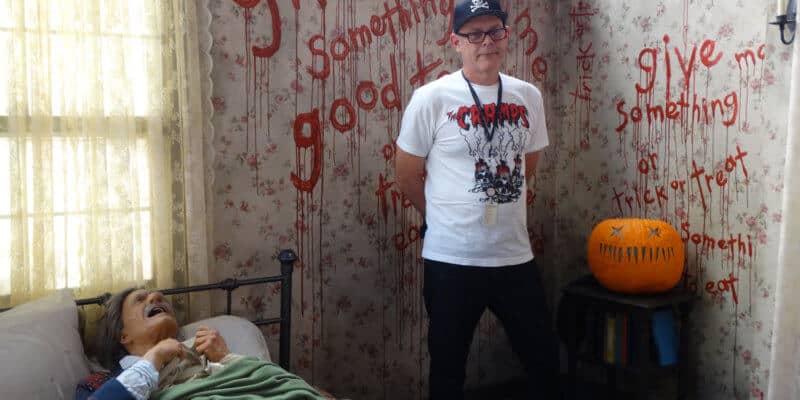 Director Michael Dougherty’s 2007 anthology horror film “Trick ‘r Treat” is something of a cult phenomenon. Despite having been underseen upon its initial release, the movie has gathered a passionate fanbase over the past decade, especially among those who can’t get enough Halloween. That’s what makes “Trick ‘r Treat” such a perfect candidate for mazes in both Halloween Horror Nights events in Universal Studios Hollywood and Universal Orlando Resort.

Recently I had the amazing opportunity to tour the “Trick ‘r Treat” maze (immediately after we saw the “Stranger Things” maze) at Universal Studios Hollywood with the park’s creative director John Murdy and a select group of other media. While once again we weren’t permitted to take many photos, Murdy took us through each scene of the experience– explaining the connections to the movie that inspired them, revealing behind-the-scenes secrets from the maze’s design, and even pointing out an Easter Egg or two along the way.

WARNING: This article contains many spoilers for the movie “Trick ‘r Treat” and the maze based on it. 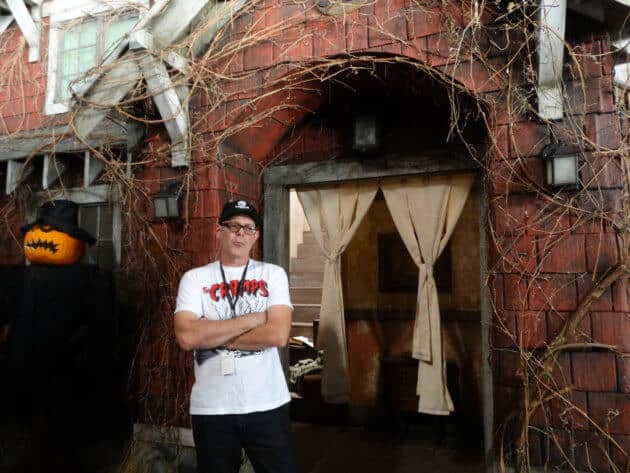 We began, as you would expect, at the maze’s entrance. “This is the facade of ‘Trick ‘r Treat,'” began Murdy. “It’s Henry and Emma’s house. We basically follow all the beats in the film– we do all the stories in the film. And to connect them together, we do a title sequence. So as you’re walking through the maze after each sequence, you’ll go into darkness and you’ll see there’s letters done exactly to the font of ‘Trick ‘r Treat’ that set up the name of each chapter of the movie.”

“It starts out with this little prologue of Henry and Emma, and we go through to the back of the house.” Murdy pauses here to point out some painted writing scrawled on a picket fence. “This is an Easter Egg, by the way. We always put Easter Eggs [in the mazes] for the fans. If you’re an obsessed ‘Trick ‘r Treat’ fan, this will mean something to you. This is the name of the short film [Michael Dougherty] made that eventually became ‘Trick r’ Treat.’ It’s called ‘Seasons Greetings.'”

We’re standing in a backyard, festooned with laundry hanging from clotheslines. “In this sequence, there are Sams under sheets that pop out at you. Then you run into poor Emma with a sucker stuck in her mouth. She looks like she’s dead, and then she comes to life. After we leave this, you see a title that says ‘The Principal,’ and of course get attacked by Sam.”

Our group makes it way to the front of another house, with a fake body of an overweight child sitting on the porch. “This is the [scene involving the] principal and the poor, unfortunate kid that smashed his pumpkins in the front yard. One of the rules of Halloween in ‘Trick ‘r Treat’ is ‘Always check your candy,’ and in this case the principal has poisoned the kid. [The kid has] this crappy t-shirt that says ‘This is my Halloween costume,’ so he also disobeys the rule of ‘Always have a costume.'” 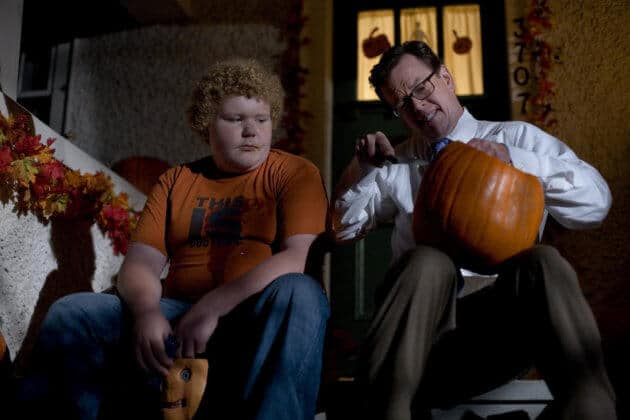 “This is a whole special effects sequence. [The kid has] all these tubes coming out of his body. Underneath the stairs is a whole drainage system that recirculates the water, because he constantly pukes. The principal [will be] a live actor who’s talking to the kid and explaining to him the rules of Halloween. And the kid’s just vomiting bloody chocolate at [the guests], basically.” 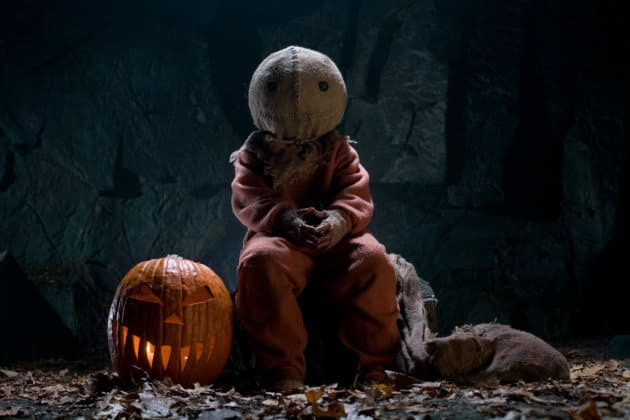 “Then you get to the next title card, ‘The Surprise Party.’ Just like in [the ‘Stranger Things’ maze], this will all look like you’re in the forest. You’re following the path of the girl in the Red Riding [Hood] costume in the film. A bunch of girls are getting these sexy princess costumes, they’re going to a Halloween party in the woods. Except when they lure all the guys there, [the girls] turn into werewolves and they kill everybody. The bodies you see [around this area of the maze] are all dressed like they’re in Halloween costumes.”

“There’s a huge bonfire in the middle of the room, there’s a life size werewolf. The girls are half-turned into werewolves, so they have the bodies of princesses but the heads and arms of werewolves that are popping out from behind the trees. You’re going to see Sam watching everything, and then as you turn the corner you’re going to get attacked by a werewolf effect, which is a [puppeteered] werewolf that’s under the control of [a] blackout performer.” 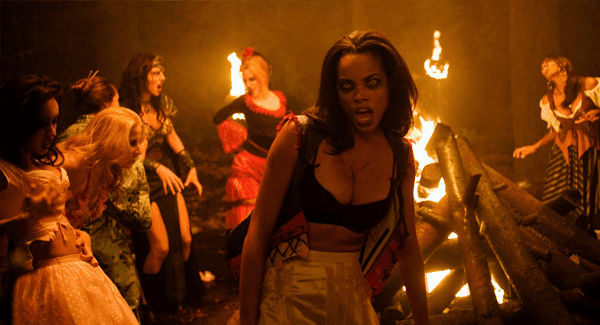 “[Next] is the submerged school bus. In ‘The School Bus Massacre,’ parents take all of their problem children, pay the bus driver to drive them into a rock quarry, and off a cliff and into a lake. [You’ll see] the bus submerged into the lake, [with] real water that will get dyed, and then we’ll see all the pumpkins and the little kids’ masks floating in the water. And then the zombie version of the school bus kids come out and attack you.”

“[The following scene] is Mr. Kreeg’s house. He’s the old man who hates Halloween. As we approach his house, there’s a moment in the film where Sam [knocks] at the door, [and Mr. Kreeg] comes outside, and his whole house is covered in pumpkins. He does not celebrate Halloween, and what you find out later in the film is he is the bus driver. He’s the guy that killed all those children years ago, and now Sam is paying him a visit because he hates Halloween. The finale of the film is a battle between Sam and Mr. Kreeg.” 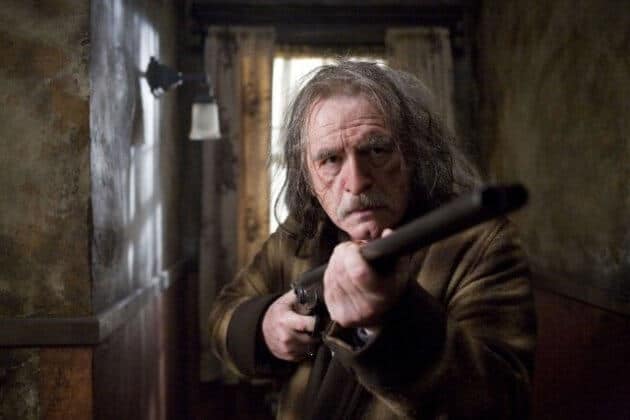 “Then we come into Kreeg’s house. He greets us at the door with a baseball bat. You’ll see] all of the candy that Sam had spilling in razor blades and broken glass and all that stuff. And then [we’ll] have all of the photos of Kreeg’s past, where you see he was the bus driver with the kids. When you get to this scene, Sam is upside-down. He’s crawling on the ceiling. Mr. Kreeg has riddled him with shotgun blasts, so his pumpkin guts are splattered all over the wall. You smell the pumpkin scent, and as you turn the corner, Sam blasts you with pumpkin juice, [which is] compressed air and water. That’s all being controlled by a blackout performer.”

We then enter Mr. Kreeg’s bedroom, where a dummy of the elderly man is propped up in bed. “The props tell you about this guy and his current state: lots of cheap alcohol and pills. When Mr. Kreeg walks into this scene in the film, all of a sudden this pumpkin just [erupts]. A big flame comes out of it, so our special effects team is recreating that. And then Sam has [sprayed] graffiti all over the walls of his house, ‘Trick or Treat, give me something good to eat.'” The maze has one final tableau remaining after that point, but I won’t spoil it here.

At the end of our tour, I asked John Murdy how involved Michael Dougherty was in the creation of the “Trick ‘r Treat” maze. “Really involved,” Murdy responded. “Mike decorates his house every year for Halloween, goes crazy doing all of these Halloween decorations just for the neighborhood kids. He’s a huge fan of [the holiday], so he’s probably more involved than a lot of people that we work with. Some other directors we’ve worked with in the past get really creatively involved: Gullermo del Toro was extremely involved in ‘Crimson Peak’ when we were doing it.”

“But also Mike was a huge Horror Nights fan before I met him, and continues to be, and comes every year regardless of whether we’re working together or not. So he knows what we do, and he knows the language of scaring people in a physical environment versus a movie. That’s always a huge advantage. It’s great to be able to collaborate with people who already know and love what you do.”

Halloween Horror Nights begins this Friday, September 14 and runs on select nights through Saturday, November 3 at Universal Studios Hollywood. For more information and advance ticketing resources, be sure to visit the event’s official website.

Comments Off on INSIDE LOOK: How “Trick ‘r Treat” will summon Sam to Halloween Horror Nights at Universal Studios Hollywood