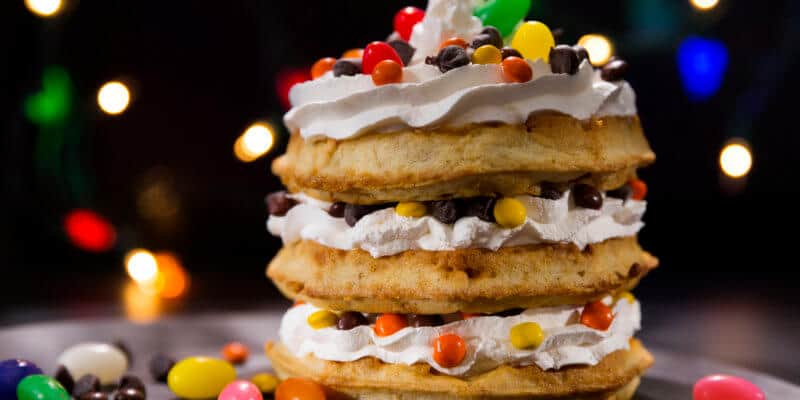 Halloween Horror Nights 2018 kicks off on Friday, September 14, and this year’s tasty treats have been revealed for Universal Orlando Resort and Universal Studios Hollywood.

Waffles get a twist with the Fudge Dipped Waffle on a Stick, which you can top with peanuts or sprinkles.

Be sure to keep an eye out for a few more “Stranger Things”-inspired treats, like the Christmas Tree Light Cupcake and the 11 Mini Donuts:

For something on the savory side, visit Benny’s Burgers in the New York area of the Park. Named after the diner from “Stranger Things” season one, you’ll find hamburgers, cheeseburgers, and chicken sandwiches, each served with a side of fries.

Returning favorites include the Fiery Onion Ring Burger at Mel’s Drive-In, Pizza Fries at KidZone Pizza Company, and the Chili Garlic Chicken Sandwich at Richter’s in the San Francisco area.

At the drink tents throughout Universal Studios Florida, grab one of this year’s three new Halloween Horror Nights signature drinks. Each libation is served in a unique blinking souvenir cup with a twisty straw. Choose from the following signature cocktails:

A variety of beer and wine is also available at the drink tents this year. In addition, Chez Alcatraz and Finnegan’s have full bars.

Two non-alcoholic frozen beverages are available at the Gramercy Popcorn to stand in the New York area, and the food and drink stand near the front entrance of Universal Studios. This “Stranger Things”-inspired Syrup and Waffles blended treat is topped with tiny waffles.

And this Halloween-themed Candy Corn treat features a bottom layer of marshmallow, a middle layer of candy corn flavor, and a top layer of whipped cream and sprinkles.

The California Park is also getting some “Stranger Things”-inspired items for Halloween Horror Nights 2018.

The Upside Down Burger is served “upside-down” and features spicy queso and Flamin’ Hot Cheetos served on a potato roll with lettuce, tomatoes, and a side of tater tots.

Demogorgon’s Totcho is a twist on the classic nacho with piles of tater tots covered in spicy queso, chili, Flamin’ Hot Cheetos, sour cream, and scallions.