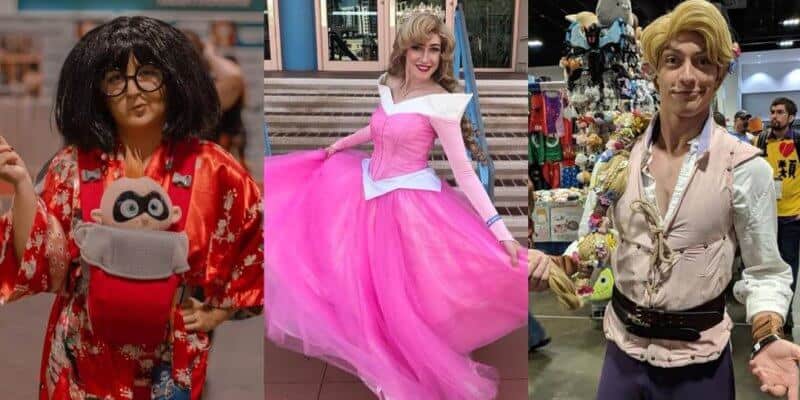 The realm of cosplay (or “costume play”) is a globalized hobby that generally means it’s Halloween year-round for those that participate. Cosplayers spend weeks, if not months, crafting, sewing, and putting together their own costumes. The hard work usually pays off when they get to showcase their work at local conventions. This year, MegaCon Tampa Bay hosted their annual comic convention at the Tampa Convention Center and we had the chance to see these incredible cosplay designs come to life.

Over the course of the three-day event, we saw characters from every fandom. However, it seems that Disney cosplays are the ones that hold the most variety. It’s incredible to see the attention to detail these cosplayers put into their work, and it’s even more thrilling to see alternate and original variations to some of Disney’s classic characters. There was no shortage of Disney cosplays over the MegaCon event, and there was even a Disney cosplay meetup specifically scheduled on Sunday!

Here are just a few of our favorites! Check out these 10 Dazzling Cosplays From MegaCon Tampa Bay 2018:

After the release of the newest Disney Princess scene for Wreck it Ralph 2, the concept quickly became popular amongst cosplayers. At MegaCon, these three were spotted with fantastic recreations of the casual Disney Princess look. Here we have Anna in her “Finish Each Others” sandwiches shirt, classic Vanellope, and Merida who really rocks the “Mum” shirt!

Nothing quite brings back that sense of nostalgia than a classic Disney princess cosplay. @CosplaywithRae pulled off the pink Aurora dress with the elegance and grace of a true princess. She even has her own Prince Phillip! Her other cosplays include Ariel, Odette, Lola Bunny, and a genderbent Prince Eric.

Moana has earned its spot as one of Disney’s newest successful animations. With beautiful melodies like “How Far I’ll Go” and catchy ones like “You’re Welcome!”, it’s no wonder this film has become a modern Disney classic. No doubt that Dwayne “The Rock” Johnson’s portrayal of Maui put a bit of a highlight on the film. Maui is a character that literally can’t be missed at conventions. At MegaCon, this Maui cosplayer could be seen throughout the convention with his immaculate hand-made fish hook prop. The sketching in the hook are pristine and he really pulled off the entire Maui look!

Sunday was crossover day! We saw a bunch of Disney princess jedis and we were so happy to see ariel join us! Thank you so much! @moxxishenanigans

This gorgeous shot of a Jedi Ariel cosplay does an amazing job showing off the costume’s details. Besides having the brilliant idea to bring a Disney princess and Star Wars together, this cosplayer went even further into her detailed cosplay by hanging R2-D2 caught in a fishnet around her waist. And if you look closely, her Triton staff is embedded with various seashells and other ocean trinkets! This is the Disney Princess we’ve been looking for.

This is one of the most original cosplays that could be seen at the convention this weekend. The hand-made outfit is accompanied by a struggling Abu (see the cage?) and an imprisoned Genie. And, of course, Iago is right there at Jafar’s side. In the world of cosplay, it’s all about the details, and this Jafar cosplayer really went above and beyond to put together this unique cosplay.

My sister has never been so fierce!! ❄️ Doesn't @robbiejcosplay make an incredible Elsa?! ? . .

Elsa has become a strong influence in the realm of Disney Princesses, which is why she’s become a favorite for cosplayers. Robbie of @robbiejcosplay is clearly able to encapsulate the ferocity and dignity of Elsa in his genderbent cosplay. Naturally, Anna, cosplayed by Meridith @questforlanters, is right by her side. These two Orlando cosplayers really pull off the essence of the Frozen sisters and they definitely were a joy to see!

It’s not too often that cosplayers choose this version of Ariel for their cosplays. Typically, cosplayers go for Ariel’s classic mermaid look, or they model the blue dress that she wears in the infamous canoe scene with Eric. Others like to recreate the very first outfit she wore as a human, which is essentially a sheet with some rope. We were glad to see Alissa, a.k.a. @ladyashexii, bring out the elegant Ariel attire which depicts the dinner scene when Ariel first uses the dinglehopper!

This cosplayer went simple, yet iconic with this Edna Mode cosplay. The costume reflects a scene in Incredibles 2, which finally made its debut this past June. The hilarious scene where Edna meets Jack-Jack for the first time is one to remember, and this cosplayer pulls it off perfectly!

Disney’s 2014 film Maleficent (starring Angelina Jolie) gives the nontraditional perspective of the villain. Maleficent’s story from Disney’s classic tale of Sleeping Beauty is told in such a way that fans have empathized with the character. This cosplayer shows her appreciation for this well-rounded character in this beautifully fleshed-out cosplay. Not only did she wear the feathery bodice and headpiece flawlessly, but those wings are a sight to behold! We can only imagine how hard it was to maneuver this accessory throughout the convention.

When a man pulls off a Disney princess cosplay this well, it just goes to show there is no limit to what you can cosplay! Cory, who goes by @cfowl on Instagram, is a Walt Disney World cast member with quite a few cosplays under his belt. Besides this remarkable genderbent Rapunzel, Cory has also taken on the role of Demitri (Anastasia), chimney-sweeping Bert (Mary Poppins), Spider-Man, and Goofy.