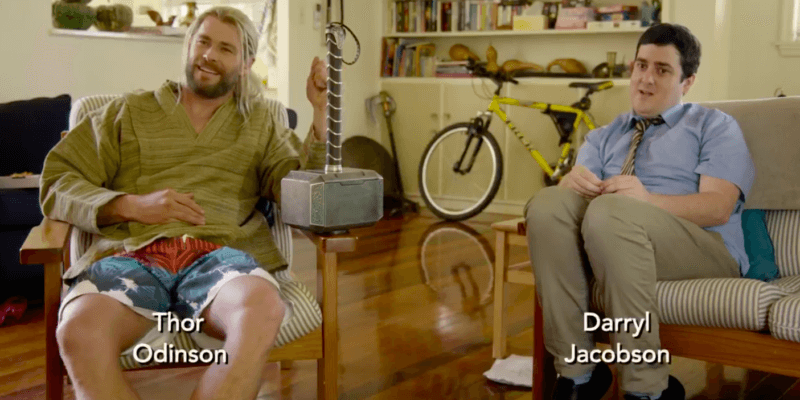 Two years ago, with the home release of “Captain America: Civil War,” Marvel introduced us to Thor’s roommate Darryl in a hilarious bonus short. Last year, the home video of Marvel’s “Doctor Strange” featured a sequel to the short, featuring Thor and Darryl arguing over finances.

Today, we finally heard from Darryl for the first time since Thanos eliminated half of all life in the universe. He took the time not only to reassure Thor that he had survived, but also to wish his roommate a Happy Birthday.

Darryl explained that, while he survived the snap, many of his coworkers did not and he now has to work weekends because of it. That explains his late birthday wish to Thor (or really actor Chris Hemsworth, whose birthday is August 11).

This delightful message reminds us of the beautiful friendship between Darryl and Thor, which blossomed as a result of Thor being left out of the Captain America vs. Iron Man Civil War.

See what Thor was up to during #CaptainAmericaCivilWar! Get this & other bonus on Dig HD 9/2 https://t.co/tWbG2IIs9h pic.twitter.com/M97y6CM1Mg

While Doctor Strange was protecting Earth from the mystical dangers of other realms, Thor and Darryl were dealing with some bigger issues.

Now that we know Darryl has survived the snap, what’s next? Will Darryl join Thor and the rest of the surviving Avengers to take on Thanos? Will his office hire more people so he no longer has to work weekends? Did Thor transfer any money to help Darryl with his debt problem? These are the big questions we need answered in the Marvel Cinematic Universe.

While we wait for answers though, we can enjoy “Avengers: Infinity War” which is available on Digital now and will be released on Blu-ray on August 14. You can preorder your copy here.

Would you like to see more of Thor and Darryl in the Marvel Cinematic Universe? Let us know in the comments below!

Comments Off on VIDEO: Thor’s roommate proves he survived the snap by wishing Thor a Happy Birthday