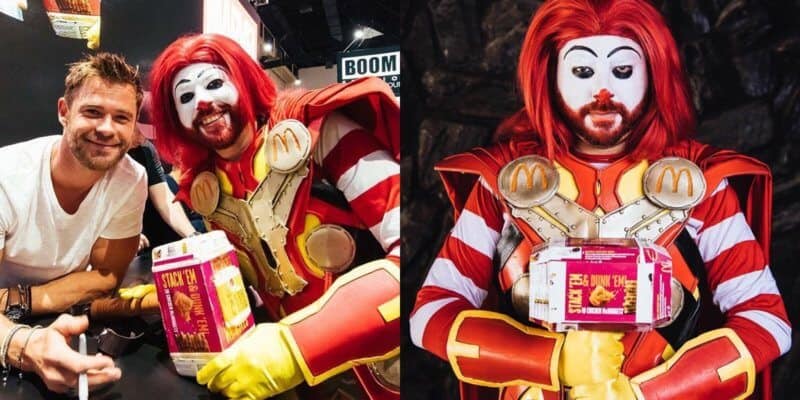 Of all cosplay creations that Inside the Magic has seen at comic-conventions, the mighty McThor is one of the rarest and unusual costumes we’ve seen yet. This twist on the God of Thunder replaces Thor’s Asgardian armor with a rugged shield of McDonald’s packaging. The juxtaposition between Thor and Ronald McDonald seems like a dubious proposition, but the character has proven to be a fan-favorite at these conventions.

The cosplayer behind this mashup, Brandon Isaacson, came up with the concept of McThor back in 2014 after an exhausting day at a Sacramento convention. He said, in an interview with Cosplay and Coffee, that it was late that night when he saw a sign for McDonald’s that the idea for McThor was born.

@mightythorcules nominated me for the Cosplay Glow Up challenge. Those tagged in the photo I challenge you next. On the left is my first build ever from 2014 @hartfordcomiccon and the rift is version 5 of the costume. My how times have changed. We can all say the the first version looks pretty awful in comparison. But when I finished building it I was so proud that I had made something. Without the lessons from the first I’d never be where I am today with the costume. I learned about sanding, contact cement, better wigs lol, and just honing my skill. We are start somewhere. Just remember that those that are beginners. ? by @jasonlaboyphotography on the right. #cosplayglowup #mcthor #mcvengers #mcdonalds #ronaldmcdonald #imlovinit #fastfood #supersize #thor #avengersinfinitywar #thorragnarok #avengers #hartford #hartfordcomiccon #dragoncon #challenge #challengeaccepted #mashup #cosplay #cosplayer #comiccon

“…then I thought, ‘ What if Ronald McDonald was Thor?” – Isaacson via Cosplay and Coffee

In the years since his epiphany, Isaacson has kept McThor as a staple in his cosplay closet. This one bewildering character has a couple of variations, including an “After Party McThor” which is inspired by the Avengers: Age of Ultron scene when Ultron reveals himself to the Avengers. More recently, however, Isaacson upgraded his McThor cosplay for San Diego Comic-Con 2018 to portray the version of Thor we saw in Thor Ragnorak last year. This meant chopping McThor’s long, luscious red locks and replacing the Mcnugget Mjolnir with a McStormbreaker.

An amazing week of @comic_con is over. I just want to give some shoutouts to those and the moments that make it amazing. Thank to the @mcvengers for following along with this crazy idea. Can’t believe it’s come this far and honored to be a part of this team of just remarkable people. Thank you to @cinemamakeupschool for the makeup help as I had some issues with running. They stepped up and helped big time. Truly great work there and I appreciate it so much. And for the costume thank you to @seanxieng for the armor template. Super helpful. For McRibBreaker huge thanks to @peppermonster for her video tutorial and instructions on how this is made. Don’t know how much I watched this. Others that I used as reference and support with their work or videos are @odinabbott and @ste_j_cosplay_one_day so much I. The way of information out there. And thank you ?! #mcthor #mcvengers #ronaldmcdonald #imlovinit #marvelcinematicuniverse #mashup #mcdonalds #marvelcomics #marvelcosplay #marvel #mcu #avengers #avengersinfinitywar #cosplay #comiccon #cosplayer #sdcc #sdcc2018 #supersize #sandiegocomiccon #thor #squadgoals #thankful #greatful #disney #disneycosplay

Isaacson’s creativity in conjunction with the success of Thor’s presence in the Marvel Cinematic Universe has sparked enthusiasm in a few other cosplayers as well. Isaacson, along with his sister who portrays a Lady McSif, have formed another specialized superhero team— the McVengers.

The team consists of Grimos (Grimace meets Thanos), Agent Starbucks (Agent Carter/Starbucks mashup) and a number of other fast-food infused superheroes and villains.

The brilliant mashup that is McThor has been so widely accepted, that McThor even made a small cameo for Thor Ragnorak. A photo posted to Chris Hemsworth’s Instagram shortly before the film’s release, shows Thor and Loki (Tom Hiddleson) sitting in front of a newspaper stand, with the cheeky hashtag, “part time job.” And if you take a closer look at the newspaper clippings behind the two Marvel stars, you can easily spot the yellow and red garb mashup of McThor. Chris Hemsworth himself seems to be just as entertained by the concept of McThor. Last year, the cosplayer took this beaming snapshot with the actor at San Diego Comic-Con.

We can’t wait to see which version this cosplayer comes up with when Thor returns in Avengers 4 on May 3, 2019.

What do you think of this McThor cosplay? Tell us in the comments below!