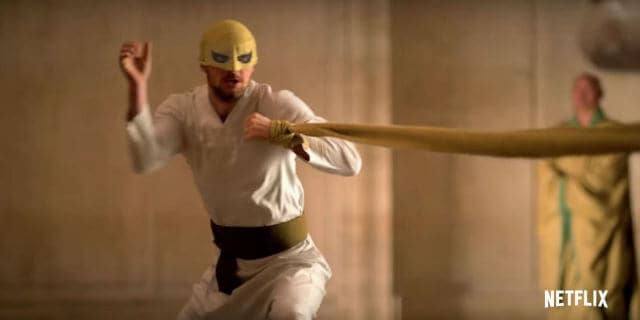 The Immortal Iron Fist returns this Fall. Fans of Marvel Comics who watched Marvel’s “Iron Fist” on Netflix last year may have been wondering if we would ever see the character’s iconic yellow mask. Now, it looks like we have our answer.

A new trailer for the second season of the Marvel-Netflix series features Danny Rand, played by Finn Jones, walking with Colleen Wing, played by Jessica Henwick. Rand suffers from flashbacks of painful memories, in which we see him don the mask as he fights an opponent in what appears to be trials for the mantle of “Iron Fist.”

The trailer goes on to see Wing assure Rand that his bad memory is in the past, to which he replies “I hope so.” The conversation seems to imply that someone from Danny’s past will be returning in the upcoming season.

The look the character takes on in the new trailer is not exactly a replica of the familiar comic book attire, but it is considerably closer than anything we got in season one of “Iron Fist” or in “Defenders.”

Marvel’s “Iron First” follows the adventures of billionaire Danny Rand who was believed dead after a plane crash, only to return to society years later with incredible unique abilities. It is the fourth series in Marvel’s collaboration with Netflix, joining “Daredevil,” “Jessica Jones,” and “Luke Cage” to form the New York-based team of superheroes known as “The Defenders.” The first season of “Iron Fist” premiered on Netflix in March of 2017. Season 2 is set to feature Typhoid Mary, who will be played by Alice Eve, as the primary antagonist.

Are you excited for season two of Marvel’s “Iron Fist” on Netflix? Let us know in the comments below!