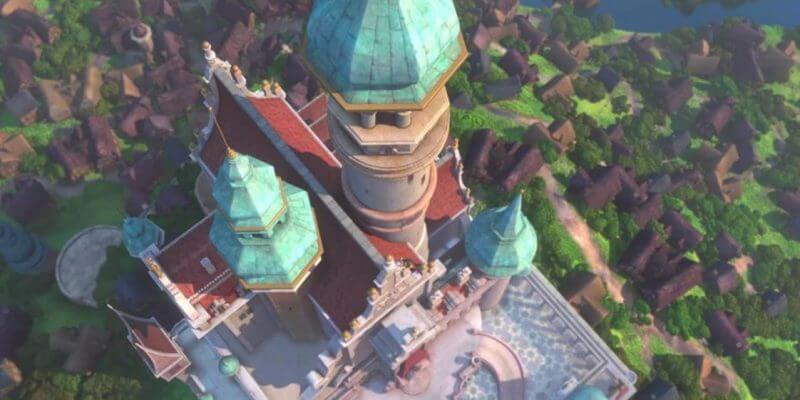 In our last installment, we took a look at the various castles found at Disney theme parks around the world. Now, we’ll take a peek at these fairytale towers and their animated appearances.

“Cinderella” and “Sleeping Beauty” may have inspired theme park centerpieces in the Walt Disney Company’s amusement parks, but the cartoon castle can be found in films like “Brave,” “The Little Mermaid,” and “The Black Cauldron,” serving as a backdrop or home for both protagonists and their adversaries. Surrounded by a lush garden and, for the most part, located in the center of Agrabah, the Sultan’s palace with its tall white walls and onion-shaped domes is the home of Princess Jasmine and her father, the Sultan. Deep within is also Jafar’s lair and a not so escape-proof dungeon.

Located well within Wonderland and Guarded by playing card shaped soldiers, this castle is home to both the King and Queen of Hearts. Adjoining this rosy castle is the croquet field. Here, cards and animals play their role as pieces of the game, an attempt to appease the Queen.

3. “Beauty and the Beast”: Beast’s Castle

Built in Baroque style, this once cursed castle boasts 60 rooms. These include the main foyer, den, library, two dining rooms, ballroom, private gardens, the East Wing, and forbidden West Wing.  Stained glass windows within this wonder tell the tale of the castle’s curse.

Lording over Prydain, this ruin of a once prestigious palace is the center of power for the evil Horned King. From here he commands his minions and also imprisons Taran and his companions. The power of the black cauldron raises an army of monsters (the Cauldron Born) in attempt to gain total domination of the land.

Scotland technically didn’t have castles for another three hundred years, but this particular palace is still the home to King Fergus and Queen Elinor, rulers of clan DunBroch, along with their rebellious daughter Princess Merida. In this Pixar film, several rooms in this squat, earthy castle are featured, including the great hall, the tapestry room, bedrooms, classrooms, and stables.

The royal ball was held here, where Cinderella first met the Prince. It eventually became her home and the place where she married the Prince.  This storybook structure was the inspiration for Walt Disney Word’s Magic Kingdom and Tokyo Disneyland’s castles.

Arendele Castle, with its chapel, long hallways, library, portrait room, garden and great hall is also the guardian of the Arendelle harbor due to its defensive location.

The isolated fortress that is Elsa’s ice palace is tucked away on the snowy peak of North Mountain. Here Elsa hoped to isolate herself others in an effort to protect them from her powers.  The snowflake shaped palace became a brief battleground ultimately leading to Elsa’s extraction to Arendele.  This icy castle was inspired by an ice hotel in Quebec.

Atlantica boasts a concert hall among its many rooms. King Steafan’s castle is probably home to the largest group nap in animated history.  All of the castle’s inhabitants fell under the good fairies’ enchantment which was only broken by the magical kiss that awakened Princess Arora (herself asleep in the tall tower, under Maleficent’s curse). Maleficent’s own castle, a dark ruin in the Forbidden Mountain, is where Prince Phillip is imprisoned as an attempt to keep him from breaking the spell cast on Princess Arora.

It might seem like an ordinary fairy tale castle from a distance.  Even the courtyard and wishing well where Snow White catches the Prince’s attention do little to convey the horrors within.  Inside the jealous queen lurks, wandering between her secret mirror chamber (home to the Magic Mirror), the Throne Room and Dungeon.

While much is revealed of the Evil Queen’s castle, the second palace is only glimpsed from a distance.  While it is the destination of “happily ever after,” the home to Snow White’s savior, the prince only makes a brief appearance for the film’s finale. King Arthur’s earlier years play out in the home of Sir Ector (who adopted Aurthur) and his son Sir Kay.  Arthur is taught by the mighty magician Merlin during his stay here.  The accommodations are far from perfect, but Merlin makes the most of his tower.

This beautiful collection of towers is the home to Rapunzel’s true parents, King Frederic and Queen Rapunzel.  It is from here that the King and Queen launch the first lantern, kicking off the annual lantern release in honor of Rapunzel’s birthday.

Sugar Rush was ruled by King Candy from here and eventually the castle became home to Vanellope von Schweetz. Made from various candies cookies and other sweets, this tasty looking towering palace includes a throne room, the code room – where the game is controlled, and a bizarre version of a dungeon known as a fungeon.

Each of these animated palaces have their own role to play the film they are featured.  Some have nefarious purposes while others provide the backdrop for a “happily ever-after” ending.  Heroic or villainous, these 17 fantastic fortresses fulfill their fantasy requirement:  the iconic castle,  an essential element to any fairy tale.