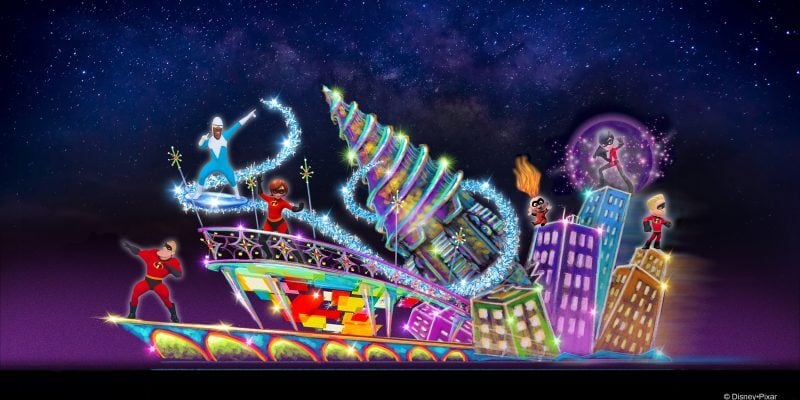 With Disney/Pixar’s highly-anticipated sequel “Incredibles 2” hitting theaters nationwide this week, it makes perfect sense that the Parr family will be highlighted as a featured presence at Disneyland Resort as we approach the opening of Pixar Pier in less than two weeks. Recently I attended a media preview event at which Walt Disney Imagineers revealed more about “The Incredibles” float coming to Disney California Adventure‘s popular Paint the Night Parade.

“Back in April, we were really excited to launch our Pixar Fest celebration here at the resort, and now we’re excited to join with the Pixar Pier opening,” said Disneyland Resort show director and choreographer Tracy Halas. “We’re going to be bringing an ‘Incredibles’ float with the Incredibles family and Frozone and we’re have them join our Paint the Night Parade, so we’re really excited about that.”


“The scene we are showing here is from the end of the first ‘Incredibles’ film– the family fights the Underminer– and it’s actually also the very beginning scene from ‘Incredibles 2,'” added Pixar’s associate creative director of theme parks Tasha Sounart. “One thing that we really wanted to do here was have a really cool action scene with all the different characters showing off all their different powers, but also utilize what makes the Paint the Night Parade so awesome, which is all the different lighting effects.”

“So we decided, ‘How can we take advantage of all the different lighting effects with all the different characters?’ With Dash, he’s running around the entire float, but in neon and it’s animated, so this is a run cycle. Violet’s really cool– she’s got this force field that’s this rotating persistence-of-vision globe. And Jack-Jack appears in four different spots around the float with different powers, so keep an eye out for him.”

“I’m really proud of how we’ve utilized all the different lighting effects for these different characters. I think it’s going to be really cool.” 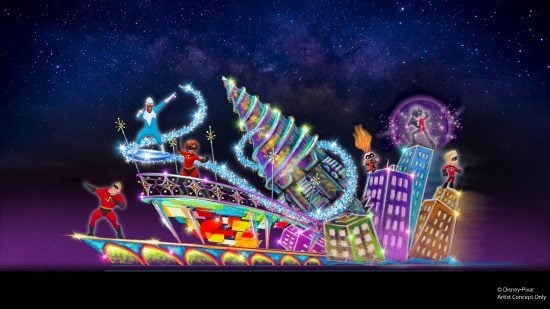 “This float is thirty feet long, eleven feet wide, and then at its tallest position is about eighteen feet [high],” continued Halas. “Frozone himself is about twelve feet off the ground up there as he surfs on this ice trail throughout, and then of course Mr. and Mrs. Incredible are joining us. All of the costumes have individually-programmed LED lighting elements to them, along with two hundred different individually-programmed strobes that light up on the float. All the buildings have their own individual LED panels, there’s about a hundred and twenty-three comprised of all of those thirteen buildings.”

“We’re really excited to add this element to [Paint the Night]. Our guests have been loving the parade. It’s brought a lot of energy and excitement to the nighttime here at California Adventure, so we’re really happy to be partnering with Pixar Pier and adding a new family into the parade.”

Comments Off on VIDEO: More details revealed for The Incredibles float joining Paint the Night Parade this month at Disneyland Resort