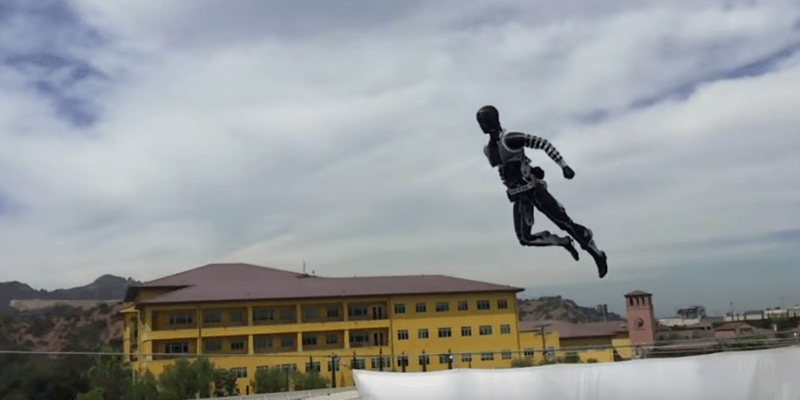 The Walt Disney Company knows a thing or two about theatrics. So when one of their many parks puts on a show, you can bet it’s going to be a dramatic, action-packed experience filled all kinds of crazy stunts. When you combine that concept with the long history of Disney’s impressive animatronics, you get something very special.

Animatronics have come a long way since the opening of Disneyland in 1955. Some of the newer ones have hit a level of realism that seems to defy logic, performing human-like movements and reactions that take them to the next level. But what if they could do more?

What if, instead of having a stunt-person providing death defying tricks for our entertainment, Disney could use an animatronic instead? That’s what Walt Disney Imagineering‘s Stuntronic project could accomplish, as seen in a new video shared exclusively today on TechCrunch.

As seen in the video above, the new Stuntronics robot can perform aerial stunts, making on-the-go corrections to theoretically become the perfect high-flying performer.

“So what this is about is the realization we came to after seeing where our characters are going on screen,” said Principal R&D Imagineer Tony Dohi. “Whether they be Star Wars characters, or Pixar characters, or Marvel characters or our own animation characters, is that they’re doing all these things that are really, really active. And so that becomes the expectation our park guests have that our characters are doing all these things on screen — but when it comes to our attractions, what are our animatronic figures doing? We realized we have kind of a disconnect here.”

With this incredible new form of animatronic, Disney Imagineering has somehow created something that looks great while actually only doing very little.

“So often our robots are in the uncanny valley where you got a lot of function, but it still doesn’t look quite right. And I think here the opposite is true,” said Associate Research Scientist Morgan Pope. “When you’re flying through the air, you can have a little bit of function and you can produce a lot of stuff that looks pretty good, because of this really neat physics opportunity — you’ve got these beautiful kinds of parabolas and sine waves that just kind of fall out of rotating and spinning through the air in ways that are hard for people to predict, but that look fantastic.”

There is no official word yet on when we might see Stuntronics robots in Disney parks, but it certainly seems like we could in the not-so-distant future.

What do you think? Would you like to see Stuntronics robots in Disney parks? Let us know in the comments below!

Comments Off on VIDEO: Animatronic stunt doubles tested by Walt Disney Imagineering for potential future use in Disney theme parks