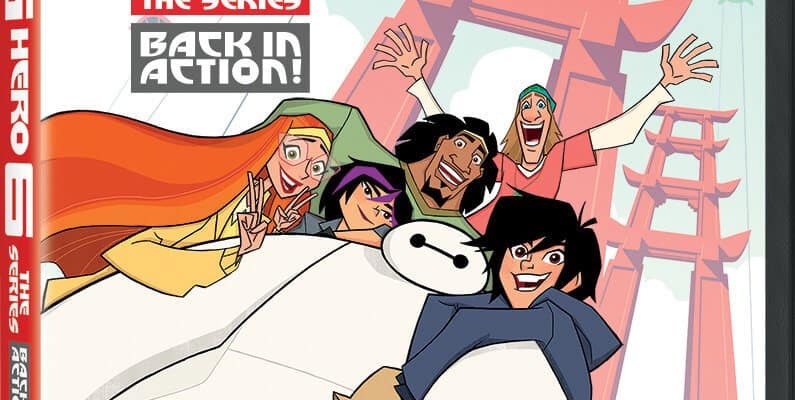 If you wanted to see more of Hiro, Baymax and the rest of the super crew after the end of 2014’s “Big Hero 6,” then you’re going to want to check out Disney XD’s “Big Hero 6: The Series.”

Tomorrow’s DVD release “Big Hero 6: The Series – Back in Action” features seven episodes of the new animated series that returns Ryan Potter to the role of Hiro and Scott Adsit to the role of Baymax. It also features six hilarious shorts, each featuring Baymax with one of the other characters. 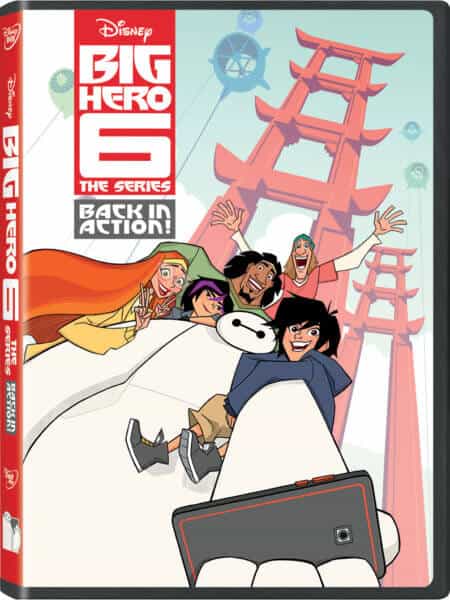 The seven episodes featured on the DVD are presented out of order in relation to when they aired on Disney XD. It is also worth noting that this DVD is not the complete first season of “Big Hero 6: The Series,” but rather a collection of the episodes that will have already aired at the time of the DVD’s release.

When first starting up this DVD, you will have the option to go to the main menu or take advantage of Disney’s Fast Play option which automatically begins playing the feature content, bypassing the main DVD menu.

The episodes featured on the DVD include:

2. Issue 188 (Episode 102) – Hiro is set up with Karmi, a fellow student at San Fransokyo Institute of Technology, who despises him for replacing her as the youngest student at the prominent school.

3. Big Roommates 2 (Episode 103) – After accidentally freezing her apartment and roommate, Honey Lemon moves in with Go Go while a new super villain is created.

5. Muirahara Woods (Episode 106) – Hiro, Fred and Baymax get lost in the woods when all of their technology, including Baymax, begins to malfunction.

6. Failure Mode (Episode 107) – Hiro struggles with his responsibilities at San Fransokyo Institute of Technology while the team deals with the return of a super villain.

7. Fred’s Bro-tillion (Episode 104) – Fred is worried about his upcoming Bro-Tillion due to past mishaps involving his mother and billionaire rival Beverly Samantha “Binky” Mole whom Mrs. Frederickson keeps trying to impress.

The bonus features on this DVD include six hilarious shorts in which Baymax attempts to expand his matrix with another character.

1. Baymax and Hiro – Hiro creates a new battery boost chip for Baymax that gives him a long battery life, but unfortunately also kicks Baymax into an unbearably high gear.

2. Baymax and Wasabi – Wasabi attempts to teach Baymax the ins and outs of yoga and relaxation.

3. Baymax and Go Go – Go Go attempts to teach Baymax how to skate, without allowing him to download information on skating safety.

6. Baymax and Mochi – Aunt Cass leaves Baymax in charge of her cat Mochi and everything he tries goes wrong. 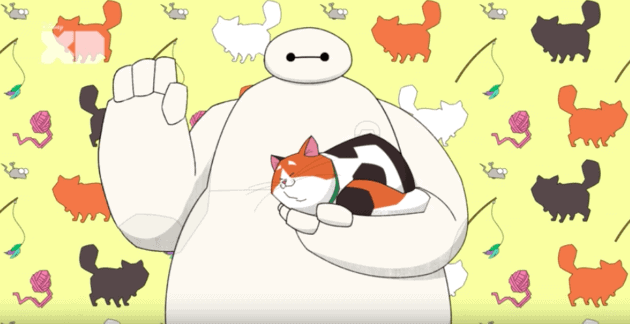 While the “Big Hero 6: The Series – Back in Action” DVD does not include the entire first season of the new animated series, it is a nice collection of episodes and shorts for fans of the lovable healthcare companion and the rest of the superhero team.

“Big Hero 6: The Series – Back in Action” will be available in stores Tuesday, June 26.

Comments Off on REVIEW: “Big Hero 6: The Series – Back in Action” DVD brings Hiro, Baymax and the gang home