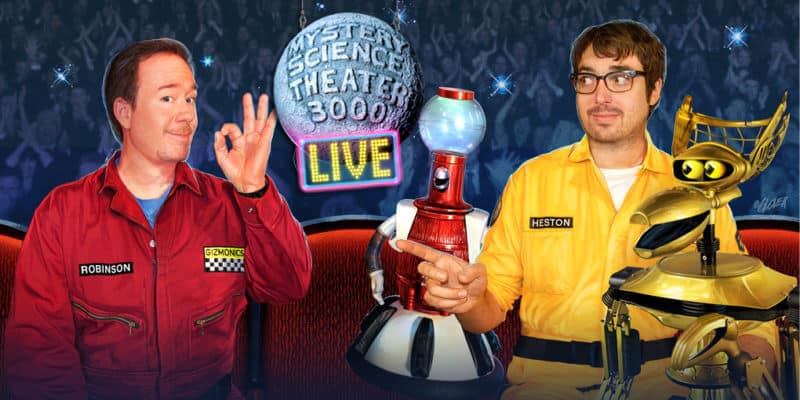 It’s no secret that we here at Inside the Magic are big fans of the cult comedy TV series “Mystery Science Theater 3000,” which recently relaunched on Netflix and this year is celebrating its 30th anniversary of mocking cheesy movies. In commemoration of the occasion, the minds behind the current iteration of “MST3K” (including original series creator and star Joel Hodgson) have announced a Live 30th Anniversary Tour with thirty dates across the United States this fall!

The best part of this surprise announcement, revealed today alongside the tour, is that Hodsgon will return as his character Joel Robinson to riff the movies alongside new host Jonah Ray (playing Jonah Heston) and of course, robots Gypsy, Tom Servo, and Crooooooow!

This tour is a direct follow-up to last year’s “Watch Out For Snakes!” tour that I had the pleasure to catch in San Diego. It was a tremendous amount of fun, and I can only imagine the addition of Joel to the movie-riffing roster (not just providing the show’s introduction) will make it even better.

The “Mystery Science Theater 3000” Live 30th Anniversary Tour begins October 9 in Portland, Oregon, and runs through November 17 for its final date in MST3K’s hometown of Minneapolis, Minnesota. Tickets go on sale this Friday, June 8 at 10:00 AM local time. For more information and a full list of tour dates, be sure to visit the official “Mystery Science Theater 3000” website.