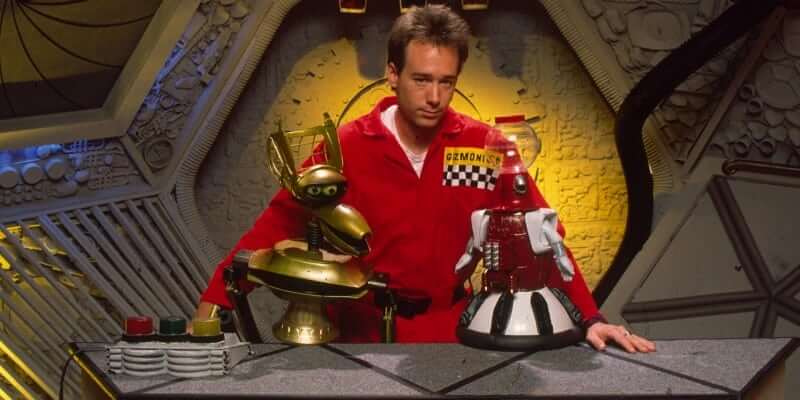 I have something I’ve been wanting to admit for a long while. It’s high time to own up to the fact that I have a gaping hole in my geek cred, and it’s something of which I’m fairly ashamed– I didn’t get into “Mystery Science Theater 3000” until it’s a penultimate season.

I do also have a pretty good excuse, however: growing up in suburban Long Island, our basic cable package didn’t include Comedy Central. I had to wait until a visit to my grandparents in Florida to catch up on great, hilarious shows like “Dr. Katz: Professional Therapist” or “The Daily Show” in its infancy (with original host Craig Kilborn). And then suddenly, around my 18th birthday, Cablevision of Suffolk County adopted a broader selection of channels. By that point, “MST3K”, as fans call it, had already moved to the SciFi Channel, and when I stumbled upon it there late one spring night in 1998 it was an instant love affair for this lonely geek.

The show’s premise, in a nutshell: a hapless Midwesterner is shot into space by a couple of mad scientists who force him to sit through some of the worst movies ever made while they monitor his reactions. Fortunately for the audience, his response is to build a couple of smart-aleck robots to watch (and relentlessly mock) the movies with him.

And ow, in this time of trepidation and growing political unrest, I’m extremely glad to know that a new season of “Mystery Science Theater 3000” is on its way. If anyone can funnel our current mounting distrust of authority and befuddlement at international affairs into wisecracking comedy gold, it’s the crew of the Satellite of Love.

Let’s take a look at where it all began, “In the not-too-distant future…”

During the summer after high school, I took my graduation money to the local Tower Records and purchased all the MST episodes that had been released on VHS by that point, along with a copy of the now-hard-to-find paperback “Amazing Colossal Episode Guide” to help me get acquainted with the mythology and behind-the-scenes history of the long-running series. It was worth the investment.

In college, I met some fellow fans of the show for the first time, and later I bought bootleg DVD copies of all the Joel episodes (Joel Hodgson, the show’s creator, served as host for the first hundred or so episodes before moving on and being replaced on-screen by head writer Mike Nelson, a move that was not without its controversy when it happened, but as a latecomer fan I appreciated both personalities).

Long story short, “Mystery Science Theater 3000” is one of my favorite things ever, even though I missed out on most of it the first time around. I love the show’s unique brand of sarcastic humor, its giddy irreverence with regard to all things Hollywood, its small-town DIY production values, everyone in its cast, and of course those nifty-looking puppets.

“MST3K”, like “The Simpsons” before it, became a sort of comedic shorthand for a very specific view of the world. After a while, it was difficult to see someone deliver a karate chop in a cheesy movie and resist the urge to yell out “Hi-keeba!” or witness the end of a bad musical performance without giving someone the “OK” sign and remarking “It stinks!”

The early aughts represented a bit of a slow period for self-branded MSTies. After the series came to a close in 1999, its cast and crew drifted around to other projects for a while before forming two separate movie-riffing troupes: Rifftrax (starring Nelson along with second Tom Servo performer Kevin Murphy and second Crow T. Robot Bill Corbett) and the somewhat lower-profile and shorter-lived Cinematic Titanic (made up of Hodgson, original Servo Josh Weinstein, original Crow Trace Beaulieu, “TV’s” Frank Conniff, and Pearl Forrester herself, Mary Jo Pehl).

After the demise of Cinematic Titanic, Joel began to cook up another idea in secret- a relaunch of the “Mystery Science Theater 3000” we know and love, but with an all-new third cast. When the Kickstarter project launched in November of 2015, it was met with trepidation by some fans who wanted Joel or Mike to step back into the host position once again, or at least to have confirmation that the old creative team would in some way be involved.

Regardless, the campaign was a smashing success, breaking all sorts of Kickstarter records and introducing us to the next host of “MST3K”: comedian Jonah Ray of “The Meltdown” and the “Nerdist” podcast. Most backers seemed to embrace Jonah or were at the very least willing to give him a chance. I felt the same way and donated more than I’m willing to publicly admit in order to get my hands on some of the exclusive rewards and to help ensure the relaunch saw the light of day. And now, like thousands of other MSTies around the globe, I’m anxiously (but optimistically) waiting to see the results.

The eleventh season of “Mystery Science Theater 3000” is (thankfully) currently in post-production, and will debut on Netflix later this year. We’re gonna need it.