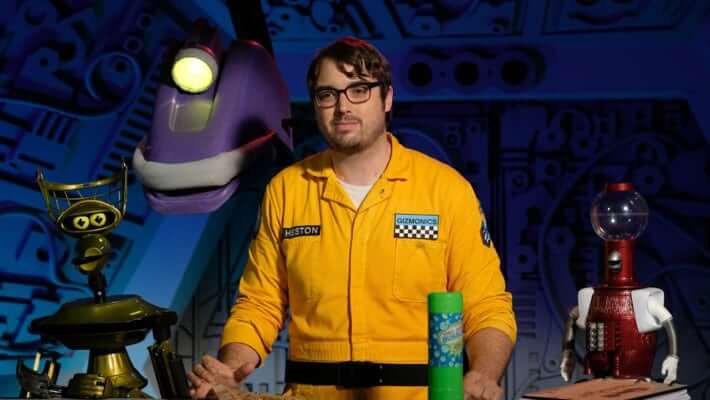 Whenever a forthcoming reboot/relaunch/rejiggering of a beloved property from one’s youth is announced (which tends to happen a lot these days) it makes sense for trepidation be the initial response. Generations X and Y have seen so many of their favorite shows and characters resurrected with less-than-satisfactory results, and yet the powers that be keep going back to the well, seeking to reclaim whatever lightning in a bottle made these efforts successful the first times around.

“Mystery Science Theater 3000” had been off the air for more than fifteen years when creator Joel Hodgson revealed he’d been developing a potential return for the show, and his Kickstarter campaign was met with exuberance from fans– it’s now the highest-funded movie or TV project in the website’s history– although some were perplexed as to why other members of the original KTMA / Comedy Channel / Comedy Central / SciFi Channel series’s creative team were conspicuously absent from the reunion. Regardless, the good news is that everyone involved in this revitalized version of “MST3K” is extremely talented. Third host Jonah Ray (of “Nerdist” and “The Meltdown,” who takes up the reins from former head writer Mike Nelson and Hodgson before him) has the kind of affable, easygoing charm that this show demands, and the new robots voices are mostly right on the mark– although I’ve found myself occasionally having trouble differentiating between Ray’s riffs and Tom Servo’s due to vocal similarities; perhaps comedian Baron Vaughn could have tapped into a slightly deeper register for his take on our favorite gumball-machine-headed ‘bot.

On the mad scientist side of things, Felcia Day (“The Guild”) and Patton Oswalt (“Ratatouille”) have taken over as the evil overlords behind the MST project, sending cheesy movies to Jonah and his robot friends from their secret base on the moon. The opening segments on the three episodes I’ve seen felt a little rushed and busy, but hopefully as the new season finds its groove, so will Kinga Forrester and TV’s Son of TV’s Frank… er, just call him Max. I will say there was an inspired “Invention Exchange” bit about Carvel Ice Cream’s Fudgie the Whale cake that will easily stand out among sketches from the early episodes. Other than the fresh cast, the biggest change in format for this “Mystery Science Theater 3000” is the sheer velocity and frequency of the jokes. Maybe I’m just an old man, but I found myself guffawing at a snide remark from Crow (Hampton Yount) during a movie only to miss the next two because they were coming at me so fast. I’m all for getting the most for my money, but I think they could have turned down the crank on the riffing pace just a notch or two for easier absorption. It also feels at times like the gang are jumping the gun too quickly– frequently Servo or Jonah will start commenting on a shot several frames before it comes into view. It’s a bit jarring and makes me wish they had taken the care to time the wisecracks out better, but it’s entirely possible they find a better rhythm as the season goes on.

Overall, however, I have to admit that as far as quality of laughs goes, “MST3K” is just about as funny as it ever was– which is to say really funny. The movie selection in this batch of episodes is excellent (I can’t wait to get to “Starcrash”) and the Satellite of Love host segments are uniformly clever, mixing the right amount of musical number in with pure absurd sketch comedy.

My only other minor complaint is that, for all the effort to establish this as a “sequel” series and not a hard reboot after all (Pearl Forrester, Professor Bobo, and Brain Guy all show up in the second episode) there’s no time spent explaining how Tom and Crow made it back to the satellite after moving in with Mike at the end of season ten. I know, I know… it’s just a show and I should really just relax.