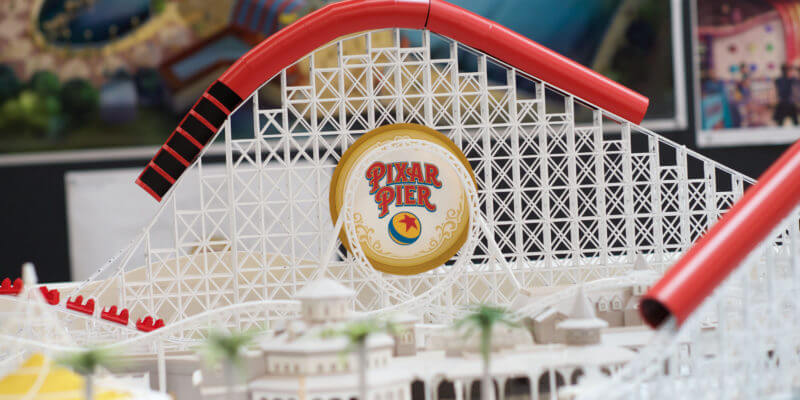 Whenever a new area or new attractions open at a Disney theme park, there’s no better source to go to for information about its design than Walt Disney Imagineers themselves. Imagineers are responsible for the creation and execution of all the amazing experiences available at Disneyland, Walt Disney World, and other Disney parks around the globe. And right now they’re working hard on finishing up Disney California Adventure‘s new Disney/Pixar-themed area Pixar Pier.

Yesterday during a Pixar Pier media event at Disneyland Resort, a select group of other journalists was treated to a tour of the Pixar Pier Preview Center in DCA’s Blue Sky Cellar, the regular home for sneak peeks of upcoming changes and additions to both parks in Anaheim. Imagineers Jeffrey Shaver-Moskowitz and Tracey Noce were on hand alongside Pixar’s Roger Gould and Tasha Sounart to guide us through the concept art on display for the highly-anticipated Pixar Pier.


We then made our way over the scale model of Pixar Pier in the center of Blue Sky Cellar, where our hosts explained the detail that went into building the model, and the function it served in helping to solidify plans for the newly-overhauled area.


For a closer look at the concept art and Pixar Pier model on display in the Blue Sky Cellar, be sure to check out the following videos we shared when the Pixar Pier Preview Center first opened on the inaugural day of Pixar Fest back in April.


Pixar Pier is set to welcome guests on June 23 at Disney California Adventure in Anaheim, California.