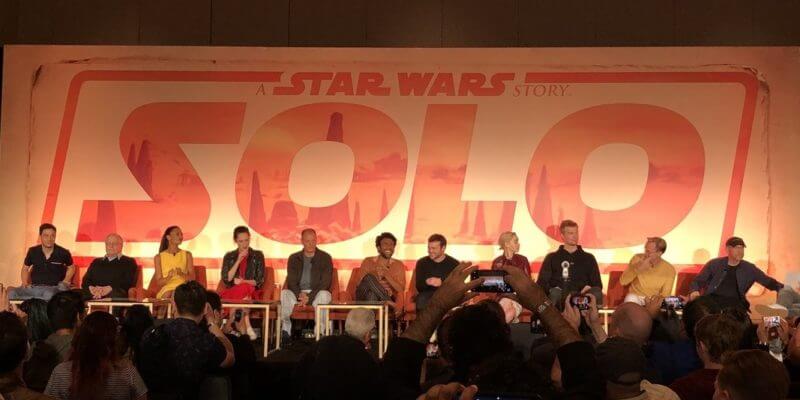 You like him because he’s a scoundrel… The popular “Star Wars” character Han Solo is back in a big way, now that Lucasfilm‘s standalone spinoff prequel “Solo: A Star Wars Story” is set to hit theaters next week. And over this past weekend, the film’s cast and creative team gathered in Southern California for a press junket that included one-on-one interviews, displays of the movie’s costumes and merchandise, and an amazing walk-through exhibit of that famous ship the Millennium Falcon.


Both before and after the press conference, the media on hand were given the incredible opportunity to walk through a full-scale replica of the Millennium Falcon’s interior, including the ship’s iconic cockpit, the lounge area with the instantly-recognizable Dejarik board, and even Lando’s bar.


In another corner of the large press room was a costume display featuring up-close looks at the outfits worn by Han, Lando, Qi’Ra, Val, Beckett, Dryden, and mysterious villain Enfys Nest in the movie.


And finally, those in attendance got a taste of just some of the many items of “Star Wars” merchandise that accompany this and every movie in the franchise upon release.


“Solo: A Star Wars Story” will be released into theaters nationwide on Friday, May 25th.