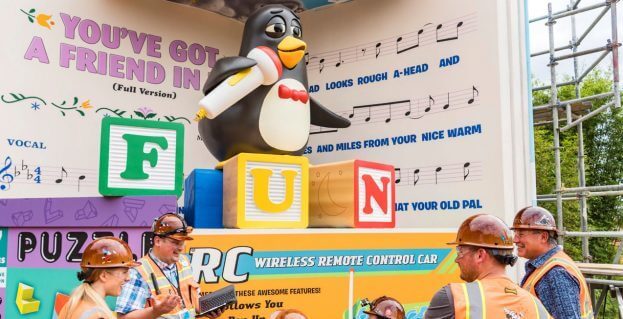 During the preview, you get a sneak peek of the Alien Swirling Saucers and Slinky Dog Dash attractions in action. You’ll also get a glimpse at Wheezy, the beloved squeaky penguin from “Toy Story 2.” This is the first and only Wheezy Audio-Animatronics figure in a Disney park. In the new “Toy Story”-themed land, guests can spot Wheezy at the end of Slinky Dog Dash, where he’ll be singing “You’ve Got a Friend in Me.”

To infinity, and beyond! @GMA FIRST LOOK at the all-new #ToyStoryLand @WaltDisneyWorld. @PaulaFaris is LIVE in Andy's backyard: pic.twitter.com/XG9Pj8q5b3

For his performance, Wheezy is assisted by Mike the tape recorder, who provides the microphone,  and Mr. Spell, who texts funny commentary. The trio is surrounded by familiar toys, including a Rubik’s cube, a canister for Pick-Up-Snakes, wooden blocks that spell out “FUN,” and toy packages for an RC Car and triangle puzzle game. Everything is framed by a towering book called “Mr. Pricklepants Songs for Singing.”

You can see all of these attractions and more when Toy Story Land opens at Disney’s Hollywood Studios on June 30!