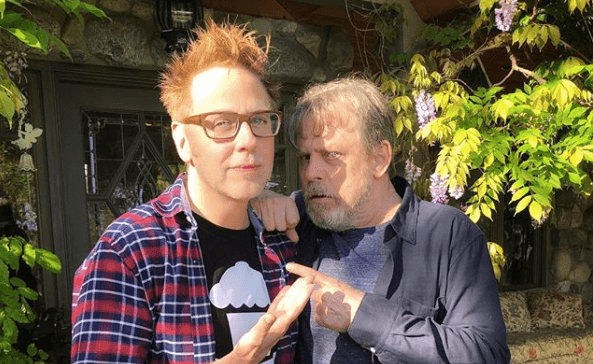 Over the weekend, the worlds of “Star Wars” and “Guardians of the Galaxy” collided when Mark Hamill and James Gunn joined forces for a Memorial Day BBQ.

It’s not clear if they actually had that casting conversation yet, but they definitely had fun celebrating the unofficial start of summer.

Finally stopped by @hamillhimself’s for that cup of coffee we tweeted about months ago. & some bbq. & cornbread & cobbler & OKAY IT’S TRUE I ATE THE HAMILLS OUT OF HOUSE & HOME BACK OFF. Honestly, he’s an amazing guy & I’m grateful to him & the whole Hamill clan for a great day. pic.twitter.com/u8E6Ak3XWT

Such a great day meeting my neighbor @JamesGunn! We have so much in common & talked about EVERYTHING: the weather, gardening tips, favorite recipes, growing up Catholic, our mutual love of dogs, bleu cheese, risqué limericks & the weather again. #FunWithGunn pic.twitter.com/5Gw1VTyHRU

The Hamills hosted the get-together, which also served as a birthday party for “Ant-Man” actor David Dastmalchian’s daughter.

Keeping Up With The @Dastmalchian Family-Celebrating the oh-so-precious Penny's 1st Birthday w/ David, Eve & the oh-so-awesome Arlo made Sunday a very special fun day for all us Hamills! (Special thanks to @chelseahamill for her incomparable homemade cobbler) pic.twitter.com/MsRxSx8YzC

Such a perfect day with the Dastmalchian, Gunn, and Hamill clan!#SundayFunday done right #HappyMemorialDay2018 pic.twitter.com/K8gFVLLWe9

“Guardians of the Galaxy Vol. 3,” which may or may not have a role for Mark Hamill, is set for release in 2020.

Comments Off on PHOTOS: “Star Wars” star Mark Hamill and “Guardians of the Galaxy” director James Gunn have long-awaited meet-up